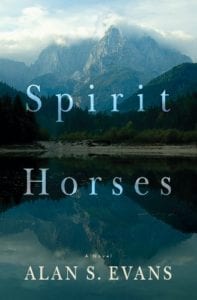 Shane Carson was a man who had everything he wanted; a wonderful wife, two great kids and a successful horse training business on a beautiful farm in Tennessee. In an instant, however, the three most important people in his life were violently stolen from him in a devastating car accident. Shane’s life changed forever as he sunk into a life of despair and drinking.

Two years after the accident, while Shane is trying to pull his life together, he comes upon a box given to him by his children’s teachers. It contains lost treasures, in the form of school assignments. Shane forces himself to go through the contents and soon finds a picture of a horse from his son’s art class with the caption, “Sloppy goes home.” The picture tells Shane what he must do.

Sloppy was his son’s favorite horse, a mustang that was destined for the slaughterhouse but rescued by a kindly woman. Not knowing what to do with the frightened horse, she gave the mare to Shane. While the talented trainer worked the mare until she was a safe child’s mount, Shane’s wife Jennifer researched the strange brand on the mare’s hip. The brand was traced to a band of wild horses owned by the Shoshone tribe in Wyoming, known as the Spirit Horses. Shane’s young son had once told him that Sloppy should be returned home and after seeing the drawing, the heartbroken trainer decides to honor his deceased son’s wish.

The trip to Wyoming was long but fairly uneventful. As Shane finds his way around the town of Reddick, WY, he thinks returning the mare to her herd will be as simple as tracking the horses. But the trainer soon finds that life in Reddick is not very tranquil. Somebody is sneaking onto the reservation and killing the Spirit horses. Before Shane can return Sloppy to her herd, he must befriend the Shoshone and help them find and stop the killers.

Spirit Horses has much to recommend it. Once Shane is welcomed onto the reservation, there are many scenes of life within the Shoshone tribe as well as descriptions of the terrain and wildlife of Wyoming. A mountain lion, grizzly beers, mule deer, and two wolf pups named Butch and Jessie share the pages with the human characters. There is also plenty of horse action for those interested in stories dealing with equines, including some natural horsemanship. Finally, a romance between Shane and Tara, a Shoshone woman, helps move the story along.

While the plot of Spirit Horses is interesting and will keep the reader hoping that Shane is able to stop the killing of the wild mustangs, there are places where the writing seems forced. Dialog too, in spots is strained. When Tara is showing Shane around the reservation, there to many details in her descriptions. It reads more as an attempt by the author to educate the reader. Show, don’t tell, seems to have been lost in parts of Spirit Horses. Other dialog simply seems clunky or unrealistic. For example, when Shane, an accomplished horseman, is told by his Shoshone friends that somebody is spreading rumors about the hay they’re selling being tainted with blister beetles, the speaker explains to Shane what these insects are. Every horseman knows about blister beetles; the explanation is for the reader, not the characters. With these awkward exchanges, the smooth flow of the story comes to a halt. Still, these flaws are not enough to deter the reader, this book is still a good read, with an unexpected ending.

Quill says: An interesting story that takes the reader into the rich world of Shoshone culture.