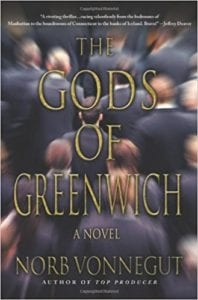 This book goes so much farther than most financial thrillers. A really well-written picture of financial greed and a real eye-opener for the reader. Things that have not appeared so far in the financial news. Gordon Gekko's Greed is Good speech has nothing on these characters.

Jim Cusack is a young trader who grew up on the streets and made out really well on Wall St. Jim's family said that they would send him to college but, when he graduated and went to work he had to promise that he would take care of his mom and two brothers and their children as they could not afford to send them all to school.

After a very good start on Wall St., Jim started his own hedge fund. Unfortunately, when the financial world started to go south Jim's fund collapsed. He was about to lose his home, and his wife had just announced she was pregnant with their first child. Jim had to take a job to survive and headed off to Leeser Capital, a Greenwich Hedge Fund that doesn't seem to ever have a bad day.

It is at Leeser Capital that Jim's real troubles begin. There are many hedge funds in the wealthy Connecticut town of Greenwich and their payouts are huge. Unfortunately, there are consequences that come with these payouts. Someone has to die. There are some crooked bankers in Iceland and a sheikh from Qatar involved in some of these deals that you won't believe. Also, as an extra added attraction, a hit-woman who is looking for new ways to kill people and, boy, does she really come up with some gems.

This reviewer wouldn't ordinarily want to read about the financial world as it is sometimes a bit boring. But, not in this tale. Some of the schemes thought up by these traders are beyond belief. Getting back to our hero Jimmy, he is trying to get back on track and taking many chances. While the ending is a little over-the-top, you will keep on reading because you just have to know how it all turns out.

Quill Says: New Economic crisis: Barbarians at the Gate for the next generation.