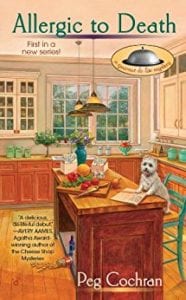 "I’m not losing anything on that diet plan of yours." There were plenty of plump rumps in Woodstone, Connecticut and Georgia Branston was going to have the biggest one if she didn’t quit cheating on her diet. Gigi used to work for Wedding Spectacular, but moved to Woodstone and started a business, Gigi’s Gourmet De-Lite. It was a Meals on Wheels delight for anyone who wanted to lose a few pounds and it was turning out to be a fairly successful venture. At times Woodstone could be a little bitty modern-day Peyton Place with all it’s little not-so-secret secrets, but Gigi was happy living in her little cottage as she made new friends. Sienna Paisley, owner of the Book Nook and her confidante, was Gigi’s best friend. There was plenty to talk about in Woodstone, including the fact that Barbie Bernhardt was Winston’s new trophy wife after he dumped Martha, Adora Sands was into “channeling her inner Gina Lollobrigida,” and Detective Bill Mertz (no relation to Fred) made Gigi’s stomach flutter big time. Soon all the hanky-panky would seem like nothing as Woodstone’s busybodies would really have something to stick their noses into. When Martha’s big ugly purse was inexplicably stolen from her car, it was the beginning of someone’s downfall ... Gigi’s.

Martha’s erratic trip down the street landed her across from Bon Appétit wrapped around an old oak tree. The shock of witnessing the incident landed Gigi in Al Forno’s slugging down a shot of whiskey courtesy of the Franchis. It wasn’t the tree that did Martha in, but rather anaphylactic shock brought on by someone carelessly tossing peanut oil over her lunch, a lunch from none other than Gourmet De-Lite. The only thing Gigi could do was start her own investigation with Sienna’s help. A few questions wouldn’t hurt, but after she entered a backstage door at the local theater, it “closed behind her with an ominous click.” This was no act. Had she gotten too close to the killer? Was she next in line for a little shock?

This first in the series is a veritable gourmet delight for readers who love a “lite” mystery. Gigi Fitzgerald is the type of character who will garner immediate appeal with most people. She’s the type of gal who will overlook the foibles of everyone until they make it her business and in this case she went from gourmet meals to murder in the blink of an eye. The soup to nuts (and sometimes nutty) cast of characters was very charming and quite alluring. The plot hinted at future romance in the series, including a little jealous action. Gigi and Sienna made detective Barney Fife look good, but I’m looking forward to their next act. If you like a mystery that is a lite-hearted gourmet buffet of fun, you’ll love this new series!

Quill says: If you want a cuddle-up cozy mystery with a très charmant sleuth, Gigi Fitzgerald, you've come to the right place!