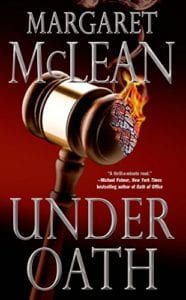 A new book by Margaret McLean is now on the shelves. The author had a very successful book in her first legal thriller called Under Fire, that featured defense attorney Buddy Clancy. In this foray into the courtrooms of Boston, she has come along with this treat called Under Oath that still is a legal thriller but is written from the prosecution’s side, featuring Boston prosecuting attorney, Annie Fitzgerald. But, take heart everyone as Buddy will be in there helping out.

This book takes place in Charlestown, which is a neighborhood in South Boston that had been the site of 33 unsolved murders between the years 1975 and 1992. This area had the dubious honor of there never being any witnesses and never one arrest in these cases. There was a time when this area was known as "The Code of Silence" which translated to see no evil, hear no evil and speak no evil, especially to the police. Buddy Clancy, aforementioned defense attorney is hired to defend Billy Malone, who is a killer and drug dealer in the area. Prosecutor Annie Fitzgerald is joining up with the Boston Homicide Department Detective Mike Callahan, who has been after Malone, to put him out of the crime business. Malone is on trial for the killing of a young artist, Trevor Shea, who painted extremely lifelike portraits of the locals and Annie brings one of the portraits into the courtroom as she believes that the picture will tell the Judge and Jury who was responsible for Trevor’s death. As stated before, it’s difficult to find witnesses who will testify against Malone and Attorney Clancy is very adept in creating doubt in the minds of the Jury. With Annie’s most important witness murdered and the FBI interfering at every turn, she and Callahan are finding it almost impossible to try the case. Also, Trevor’s brother Chris is in the courtroom every day and Annie has her work cut out for her.

The author writes some exceptional trial scenes but doesn’t make the whole book take place in a courtroom, which many legal thrillers do. Sometimes courtroom scenes tend to go on and on and the reader loses the story line. The reader will not lose interest in Under Oath as there is action right up to the last page. A definite keeper!!

Quill Says: A very intriguing read that will keep legal/thriller readers busy. The scenes in Charlestown are mind-boggling and the justice system is put on trial covering the questions that exist in the legal system today.