Promise Not To Tell 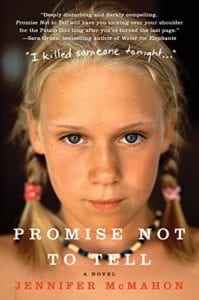 Promise Not To Tell

Promise Not To Tell, Jennifer McMahon’s debut novel, is a chilling trip through empty potato fields, dark woods, an abusive home, and a hideaway cabin where kids play and murders are hidden.

The book follows two separate stories; a recounting of a 30-year-old murder of a child in rural Vermont and the current story of that girl’s best friend. Del Griswold, nicknamed ‘The Potato Girl’ by her cruel classmates because of her dirt-poor appearance and the smell of potatoes that seemed to follow her, was taunted at school and abused at home. Her closest friend, Kate Cypher was too ashamed to admit to others that she played with Del. When Del was teased at school, Kate pretended to ignore the other kids or sometimes, joined in the teasing. When the teasing escalated to throwing pebbles and then rocks at the misunderstood girl, Kate was too embarrassed to come to Del’s aid. When Del’s lifeless body was found shortly after the final rock throwing incident, Kate partially blamed herself. Soon, Del became a legend, with young children telling of the potato girl’s ghost who haunted the local woods.

Thirty years later, Kate, who had moved far away, returns to Vermont to care for her mother who is suffering from Alzheimer’s disease. Upon Kate’s return, a young girl is murdered in the same manner as Del. Is there a copycat murderer or has Del’s ghost returned to extract her revenge?

Promise Not To Tell jumps back and forth between the present and the events of thirty years ago. At first, the retelling of Del’s long ago murder seems to be just that, a retelling. But slowly the two plotlines begin to parallel each other and then gradually merge. Has Del come back to punish Kate for not helping her all those years ago? McMahon has complete grasp of the horror genre and avoids many overused clichés. Her characters are well-developed, from the slightly strange and abused Del, to Kate and the angst she suffers from her failures as a child, wife, and daughter, to Nicky, Del’s big brother and Kate’s childhood beau. The story moves along at a very quick pace and is hard to put down – indeed I read the book in one sitting as I didn’t want to stop.

Quill says: A spine-tingling tale that will have you wondering up till the end if ghosts really exist.