Vanishing in the Haight (A Colleen Hayes Mystery Book 1) 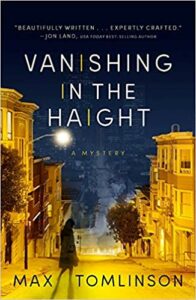 Vanishing in the Haight (A Colleen Hayes Mystery)

It was The Summer of Love in 1967, on the dark, foggy streets of San Francisco. Eighteen-year-old Margaret Copeland, stumbling around alone while tripping on LSD, decided it was time to straighten her life out and go home to her estranged family. But while she tries to focus on locating a pay phone to call home, an ominous young man in a green Ford Falcon entices her into his car and she meets her dark fate that night, instead of beginning her journey home.

Eleven years later, Margaret’s father, Edward Copeland, is nearing the end of his battle with terminal lung cancer and as his last dying wish, he wants to see Margaret’s unsolved murder solved and her unknown murderer brought to justice. He hires a young private investigator, Colleen Hayes, to re-examine the cold case. Colleen, who is on probation for committing a crime of her own, is working as a security guard for an abandoned old warehouse. The warehouse doubles as her home while she tries to get her life back on track after serving nine years in prison. Mr. Copeland’s lawyer convinces Colleen to take the job, after she realizes she has nothing to lose and desperately needs the generous compensation they are offering.

While juggling her obnoxious parole officer, an estranged daughter of her own and the dead girl’s handful of a sister Alexandra, Colleen still manages to piece together a puzzle that the authorities seemed uninterested in pursuing in 1967. When she discovers homicide detectives and a local, powerful politician were somehow involved in a cover up and secret affairs, things get dangerous for Colleen. Yet she persists and pursues every little detail of the murder, hoping to find something that was missed. Will an old roommate, a conscientious maintenance man and mysterious fragments found in the victim’s stomach be enough for Colleen to solve this eleven year old mystery? You’ll have to race to the end to find out! This book kept me up late a few nights, wanting to read just one more chapter. It is very well-written and has deep, well-developed characters. And just when I thought I had it all figured out, some last minute plot twists had me stunned...and yearning to read the next book!

Quill says: Vanishing In The Haight is tantalizing and engaging, the kind of book that is very hard to put down. This one is highly recommended for all lovers of a truly chilling murder mystery.