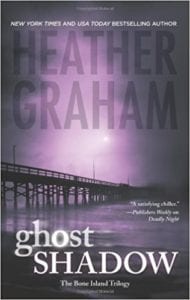 Katie O’Hara is a young woman who is happy with her life. While she may not have a high powered career, she loves living in Key West, Florida; enjoys running ‘Katie-oke’ (as in Karaoke) at her uncle’s bar, and one of her best friends is a ghost. How is that possible? Katie can see, and talk to, many of the ghosts who inhabit Key West.

While Katie’s career may not be supercharged, she does plan to purchase and re-open the Beckett Museum, the site of one of the most notorious of Key West’s murders. Ten years previous, a young woman, Tanya Barnard, was murdered and her body placed in one of the exhibits. The following morning her ex-fiancée, David Beckett, had the misfortune to find her body. Katie would like to return the museum to its former glory, and all she has left to do is sign the last batch of papers, But then David Beckett returns from a ten year absence and puts a halt to the sale; he doesn’t want “…to see history repeat itself.”

Regardless of David’s wishes, it soon appears that history is repeating itself. You see, other people start turning up dead, and in much the same way as Tanya. Is David the murderer? Katie doesn’t know the answer to that, but what she does know is that she is falling in love with this handsome man. With the help of several ghosts, her brother (who also comes home to Key West) and David, Katie sets about to solve the mystery. What she doesn’t know is that she is being targeted by the killer too.

It took me exactly five pages to get drawn into Ghost Shadow; that’s when we learn of Tanya’s murder. The story was quick reading and offered a good mystery that kept me guessing. I thought I had figured out the murderer several times but each time, a few chapters later, I found I was wrong. You’ll have to pay attention to the little clues the author tosses out; they’re easy to miss.

I also really enjoyed the character of Katie O’Hara. She was believable and had just the right amount of spunkiness to her personality so that she was fun without sacrificing realism (no superhero characteristics). Her ability to see and talk to ghosts was a big part of the story and I loved this aspect of the novel. While many stories that incorporate ghosts get silly and just don’t work, Graham weaved her supernatural characters into the tale perfectly so that they seemed like a natural fit. In fact, Bartholomew, a long dead pirate, er, privateer, as he repeatedly reminds Katie, was my favorite character. While he can’t protect Katie in a physical sense, he can warn her of danger, other ghosts, and help her solve the murders. It’s clear he cares for her and I found their relationship touching. In short, Ghost Shadow was a fun, satisfying read.

Quill says: Heather Graham has another hit series on her hands with the publication of the first of The Bone Island Trilogy.