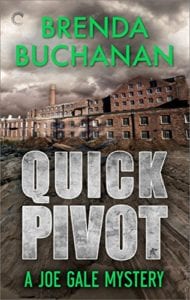 Riverside’s once thriving Saccarappa Mill was part of Maine’s ever-changing landscape. Nothing ever lasts and the fact that the Saccarappa was going to be turned into a “hipster magnet” by developers was proof of that. Joe Gale was on hand to watch a sledge hammer demolish a wall. The fact that a few bricks would go flying wouldn’t give him much of a story for the Portland Daily Chronicle, but then again it would be something. That something would soon plummet Joe into a search for a missing man, a half a million bucks, and secrets that could blow Riverside apart. Behind those bricks were skeletal remains that would bring out the looky-loos in droves.

George Desmond, Saccarappa’s finance officer, had been missing since 1968. Instead of William, “embezzlement” could have been his middle name. Perhaps, but his sister, Helena Desmond, didn’t buy that. Joe was Paulie Finnegan’s protegé and decades ago he’d been on the search for the truth and the ultimate scoop. “George wouldn’t take a dime,” Earl exclaimed to Paulie, “if a blind man dropped it on his shoe.” Would he? Paulie was determined to figure out just who altered Saccarappa’s financial records and hoofed it off with a virtual fortune.

Joe had Paulie’s notes, which were more like cryptic shorthand than anything else. The scramble was on to find out just who had been lying behind that wall all these years. In Paulie’s day “the arrival of the feds had ignited a turf war,” but Chief Barbara Wyatt wasn’t making it any easier for him. Words from the past kept echoing in his mind. “He who lives by the mill dies by the mill.” Just what implication did it have in this case? Joe began to dig into the past, but the search for those who remembered the people and those who worked next to the Casabago River wasn’t going to be easy. Would Joe get his page-one story or end up behind a brick wall himself?

Joe and Paulie are an interesting private detective duo who are separated by time. The man behind the brick wall scenario is one I’ve seen many times before, but I love the way first time novelist Brenda Buchanan integrated the past and the present. The backstory was excellent and the flashbacks seamless. Not a genre that I usually read, but as the characters and tale from the past were woven together, my interest peaked. There wasn’t a lot of what I’d dubbed cozy mystery fluff, but rather a good solid mystery that kept me moving. The characters were fascinating and very well-developed. Buchanan’s ability to capture the essence of a cold case and bring it to life was quite impressive. Would I read her work again? If this is an indication of what she has to offer, I’m all in.

Quill says: If ever a cold case can come alive with a bang, Buchanan definitely can do it!