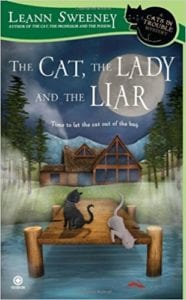 It couldn’t be said that Shawn Cuddahee, owner of the Mercy Animal Sanctuary, had much going for him at times, but he did have one thing going against him and that was a restraining order from the animal control officer. Cats with diamond studded collars weren’t often left along the side of the road, but try as he might he couldn’t get anyone at the Longworth Estate to respond to his calls. Jillian Hart, who was quickly learning how to be a small town busybody from the best of them at Belle’s Beans, was up for helping a cat in trouble any day and was going to head over to the estate to investigate if and why Isis had been abandoned. It was said that Ritaestelle Longworth, once a pillar of the community and Isis’s owner, was now five short of a six pack and was turning into a klepto.

Jillian, who had three cats of her own, Syrah, Chablis, and Merlot, had a soft spot for cats and an investigative streak that wouldn’t quit. She soon found herself standing in front of Ritaestelle’s antebellum mansion in Woodcrest, South Carolina ready to claim she was a journalist checking out “grand homes of the south.” Jillian lucked out and got past the butler to see Evie Preston, Miss Longworth’s assistant, who was onto her act even before she set one toe through the door. “I don’t’ seem to be able to find anything on the Internet about a journalist named Jillian Hart, but there is certainly a good deal about that woman by that name who takes a great interest in cats. Have you come about Isis?” A “muffled cry” and a thud interrupted their conversation.

Evie hurried up the staircase and Jillian wasn’t far behind. Instead of Scarlett O’Hara getting ready to flounce down the stairs to meet Rhett, she spotted Ritaestelle struggling on the floor. For some reason, Ritaestelle seemed to recognize her. On her escape from yet another potential calamity one other person recognized her … for speeding. Police Chief Nancy Shelton, who didn’t mince words, said, “I advise you to keep away from the estate and out of Woodcrest.” No problem. Jillian was just going to have to get her good friend Deputy Candace Carson’s help on this one. After a relaxing evening at home after her ordeal, Jillian was more than ready to head to bed when the doorbell rang. “You weren’t expecting me?” It was Ritaestelle, who promptly began to rant about sabotage and people drugging her. No, Jillian wasn’t expecting her and she sure wasn’t expecting to find Evie Preston “facedown in the water” floating around like a fishing bobber by her dock a short time later. Did she miss something in her “investigation?” Just in case anyone needs reminding, this was, count ‘em if you please, the third corpse on her hands since she’d moved to Mercy!

This is *the* best mystery the cats have dragged in so far in this series. Just when you think things can’t get any better they do. Sometimes when the plot thickens in a series they simply fall apart, but when Leann Sweeney mixed up her version of this cat mystery the recipe was smooth, sweet, and ultra delectable. All the characters I’ve come to enjoy from the first two in the series, including that cornball, Lydia Monk, are back on the scene ready and willing to help Jillian figure out whodunit for the third time around. There was just the right amount of mystery, intrigue, and humor to keep me flipping the pages.

Quill says: This is one sweet Southern cat mystery full of pecans and they’re not baked in a pie!