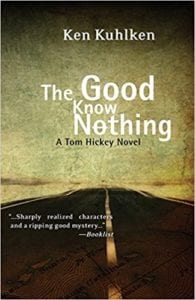 Tom Hickey lived a very interesting life before finally becoming a LAPD Detective, as his father, when Tom and his sister, Florence were children, left them with a very abusive mother. It seemed that Charlie, the father, had just completely vanished into thin air. Tom also ran away, taking Florence away from their mother at the tender age of sixteen.

After he tried some various careers, Tom’s current job is working as a detective in California in the year 1936. The police chief is a little on the shady side, but Tom seems be on his own most of the time even though he has some hard times with his boss. An old friend of Tom’s father, Bud Gallagher, shows up with a manuscript supposedly written by Charlie Hickey. The book was written and published by a man called B. Traven. Tom and Florence read the manuscript along with the published book and find that they are, word for word, identical. This is all Tom needs to start looking for his father in the hope that he is still alive somewhere. Tom is determined to find his missing father even though his quest may just be putting his marriage in jeopardy.

In his travels to find his father, Tom meets up with Harry Longabaugh, more commonly known as the Sundance Kid. Tom learns that Charlie had been on a tear to find out what had happened to author Ambrose Bierce after said author had upset the powerful publisher, William Randolph Hearst. As Tom and his sister get closer to their father’s (maybe) confrontation with Hearst, they get help from evangelist Aimee Semple McPherson, a friend of Florence’s. As the siblings go on the hunt for Mr. B. Traven, the so-called author of the book, which was called, The Death Ship, they meet some fascinating folks; beginning with Aimee, The Sundance Kid, a woman called Betty Weaver, who was head of a gangster group that included John Dillinger and Pretty Boy Floyd and, of course last but definitely not least, William Randolph Hearst.

Quill says: This book will take readers on a fast ride through the history of the great depression during the 1930’s. Readers will look forward to more of the antics of Detective Tom Hickey.