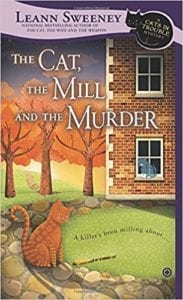 Cats, cats, cats, and more cats. Jillian Hart was heading over to the Lorraine Stanley Textile Mill with Sean Cuddahee to check out the apparently large colony of feral cats that was reported in the building. Dustin Gray was going to open up the building for them so they could look around. Jillian’s imagination was running wild picturing those ill and abandoned cats dying in every nook and cranny, but they found something else altogether sitting in the debris. “What you think you’re doin’ here?” It was a woman, a woman named Jeannie. An honest to gosh real live woman who smelled like an “unpleasant combination of spoiled food and an unwashed body.” To top it all off, she was raving about keeping away from some holy place.

Feral cats were one thing, but a traumatized homeless woman was quite another and Jillian had to somehow help her. Her best friend Deputy Candace Carson was going to help brainstorm what she and Dustin could do with Jeannie, or Clara Jeanne Sloane as they soon discovered. “She disappeared years ago,” Candace explained, “Rumor was she went off to look for her daughter, Kay Ellen.” Jillian’s empathy went far beyond cats and she recruited her boyfriend, Tom Stewart, to help her check out the situation a bit further. They headed out to Ed’s Swap Shop to ask Ed a few questions about Jeannie. If they were going to help her, they had to know just who she was, including her “invisible” cat named Boots.

Apparently Jeannie had disappeared years ago in search of her missing teenager, Kay Ellen, and never returned. Armed with more information about her, Jillian, Dustin, and Candace headed back to the mill to try to convince her to leave. It was going to be a tough call trying to move a woman who “believed in magic and fairy tales,” but since meeting Jeannie, Jillian was doubting her own sanity when she kept running up against that “ghost cat.” Jeannie had been injured and once they got her out of the mill, Dustin began to check out an old chimney and a tarp stuffed inside it. It looked like the cat and Jeannie’s problem had been solved until Dustin pulled something out of the tarp, “I never held the hand of a dead person before.” Oh, really? It looked like murder had visited Mercy once again.

Jillian Hart is faced with one of the most intriguing murders Mercy, South Carolina has ever seen. As soon as Jeannie showed up in the dust of that mill, I knew Leann Sweeney had penned another fascinating cozy mystery. One of the most interesting things is that strange, but true “ghost cat,” Boots who somehow holds the key to that body in the mill. Many of the old regulars I’ve enjoyed in the series are still hanging around, including that wild and crazy assistant coroner, Lydia Monk. Yes, she’s still got her eye on Tom. The mystery is hot, the characters are fascinating, and there’s once again those deep, dark secrets that make the tale a page-turner. The cats are back and the mystery is better than ever!

Quill says: This is a cozy mystery with a little dash of paranormal that is most definitely the cat's meow!