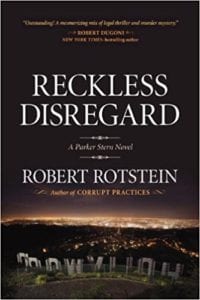 The debut novel by this incredible new voice on the thriller scene, Corrupt Practices, was a wild, amazing ride that readers are still talking about. Introducing a new character, Parker Stern, the suspense audience received a well-rounded attorney who brings to the table intelligence, wit, talent and a tad bit of anxiety, to say the least.

Parker had some very difficult problems in his past, but now that he has survived the pain of his previous case he’s ready to begin again. In this new tale, Parker must face the in-depth and more-than-confusing world of cyber age electronics and the gaming community.

Hired to defend a client in a libel suit, Parker dives in; the only odd thing for him is that he only communicates with his client on the computer screen. The defendant in the libel suit is on a ‘chat’ program and refuses to show his face or reveal his identity to the public.

William H. Bishop (AKA: “William the Conqueror”), owns newspapers, television stations and a wealth of media that goes around the world and back again. Used to getting his own way, he is the one suing Parker’s client, Poniard. Poniard is a video game designer whose latest brain child, Abduction!, features the kidnapping of an actress, Felicity McGrath, by Bishop’s hired hands.

Poniard, which is the only name the defendant will give to Parker, is able to get the attorney to work for him even though Parker has, more or less, given up criminal case work and is now focusing on being a mediator. Against his better judgment, Parker takes the case, even though all personal information of his client will be withheld. Poniard is convinced that Bishop actually had this actress killed and, if this is true, his game will not be considered libelous, and Bishop will be proven a murderer.

When murder comes into play, Parker changes his mind, but his gaming client says that he will reveal Parker’s past when he worked as a child movie star to the public. Although this might not seem like much of a threat at first, Parker looks into his client’s claims and sees that this case is turning out to be a whole lot more sinister than first expected. Parker’s opposing counsel turns out to be an old girlfriend and, sadly, he even must deal with loss as he attempts to see justice done.

There are more than a few authors who write legal thrillers out there, but Rotstein has certainly risen above the pack in a very short time. The story never stops and the subplots can change on a dime. One of the best things about the book is the main character. Parker Stern has an odd past as a child star, and his mother is even involved in a Hollywood cult, which means the ‘mother-of-the-year’ award is out.

Quill says: This is a ‘one-two’ punch by Rotstein, and if readers have not read the first book, they will definitely want to after reading this one, and yearn for more!