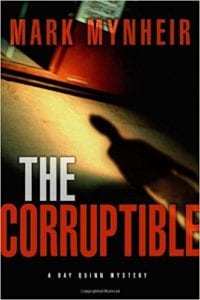 The Corruptible is the second book in the author's Ray Quinn series, and not only is this another well written mystery with all the ingredients readers are looking for in an unforgettable read, but it also provides well written characters, an interesting plot, and a few little "surprise" side stories thrown in for good measure.

Ray Quinn is an ex-homicide detective in Orlando, Florida who was wounded in the line of duty and is now a Private Investigator. He has an assistant, Crevis, who is studying to enter the Police Academy and is also back-up for Ray, as Ray has a crippled leg and can't get around all that well. As our story opens, Ray is being threatened by a very furious and very large skirt-chasing husband of one of his clients. To top it all off, he is cornered in a bathroom stall with no place to run. This situation is something he could certainly pass on as his disability keeps him from running, but the cavalry arrives in the form of Crevis, who saves Ray's bacon and dispatches the attacker, leaving him unconscious on the floor. When asked if he is OK, Ray says: "I'll survive. I think I broke his fist with my face though. That'll teach him."

After returning to his office Ray is faced with a new client, Armon Mayer, who is the CEO of Mayer Holdings, an investment firm that manages assets for some of the wealthiest clients in the world. The client hires Ray for a great deal of money to find a former employee who has stolen the personal and financial information of some of Mayer's richest clients. This person is Logan Ramsey, who was working for Mayer and also once worked in the Orlando Police Department with Ray. Ray takes the assignment as it should be somewhat easy to find Logan, who is an ex-cop and is now working for Security at Mayer Holdings but, as per usual, things are not easy for Ray and he soon realizes that he will have to do a great deal of work to earn the zeros on his paycheck from Mayer.

Soon Ray and his police cohorts do find Logan in a falling-down motel but, unfortunately someone else found him first and left him for dead. The information that Ray's client needs is not in evidence, and Ray soon begins to doubt that Logan was even a thief in the first place. Things are about to get very interesting as to who the bad guys and good guys really are, and Ray is about to find out just how much people will do to cover-up their crimes, offering the readers surprise after surprise that will keep them guessing until the very end.

This is the real thing, written by a former member of the police force in Florida who knows his subject to the letter. The first Ray Quinn Mystery called, The Night Watchman, was a real page-turner and this new offering is a step-up from the first. As you race through the pages, you will really identify with some of the fabulous characters. I know that the author will become a favorite mystery scribe to many, and readers everywhere will be looking forward to more Ray Quinn Mysteries to come.

Quill Says: Enjoy this police drama written by a real policeman, which is a fantastic narrative of real police work and the drama involved with solving a difficult case without hardly any clues to help.