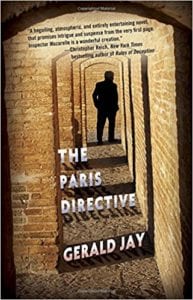 This novel has everything! Suspense, wonderful characterization, beautiful descriptions of the French countryside and it is truly a one-day read with a lot of edge-of-your-chair narrative.

It begins with a man, Klaus Reiner, who is a Hit Man by trade and very good at his job. The first hit that we follow him on really doesn’t have anything to do with this story but still, you can’t help but buy him as someone who really loves his work. After this small side trip, the real story begins. Klaus is hired by two former French Intelligence Agents to kill an American who will be vacationing in a small town in the French countryside. Klaus locates the target although the intended victim and his wife are there visiting an old friend and there are numerous people around which is not to Klaus’ liking. He just likes to point and shoot and take off for places unknown until the fuss blows over. The hit goes south as Klaus watches from a hiding place and he has to plan it all over again. This new plan also messes up and Klaus has to kill all four of the vacationers. His plans were always to kill his target and get out. This time it didn’t work out for him at all.

A new person on the scene, Inspector Paul Mazarelle, formerly on the Police Force in Paris who is now working in this small town, is asked to investigate this horrible crime. His main suspect is Ali Sedak, a local handyman, who is a thief (and not a very good one) but the Inspector finds it hard to believe that he would have had the smarts to pull this off even though the evidence points to him. The daughter of two of the victims, who is a District Attorney in New York City, shows up and tries to help. Unfortunately, most of her "help" is simply getting in the way of the Inspector’s investigation.

This crime turns out to be very political and not at all what anyone expects, which makes the story even more interesting. Anyone who is a fan of intrigue will jump on this book and read it from cover to cover.

Quill Says: This novel will excite readers of thriller/fiction and is also like a travel guide through the French countryside. It will bring all the skills of a 'cool as a cucumber' villain against a Police Inspector who was ready to hang it up and end his career.