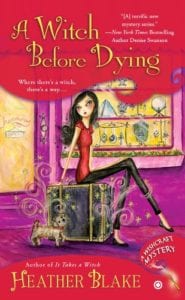 Darcy Merriweather was a Wishcrafter, but perhaps the last thing she may have put on her wish list was the necessity of having to move in with her aunt after her divorce. Aunt Ve owned "As You Wish," a concierge service that lived up to it's name, something that Darcy would soon discover. Aunt Ve was indisposed with the flu and when Elodie Keaton approached her with an unusual request, it truly was a your-wish-is-my-command situation. Elodie's mother, Patrice Keaton, vanished from the face of the earth more than a year ago and her house needed a bit of a makeover. Well, maybe a lot because Patrice was a hoarder, an extreme one.

Marcus Debrowski spooked Darcy when he claimed that the Anicula amulet was responsible for Patrice's death. Magic did live in the Enchanted Village, but such a potent amulet shouldn't have been in anyone's possession, let alone Patrice's. The Anicula was the only way a Wishcrafter could "grant their own wishes," but had she really abused its powers? It was a moot question because she was missing and Darcy had to clean out that mess. She'd rather be making eyes at hunky police officer, Nick Sawyer, but garbage would have to do. Darcy discovered that the Hoarders show and its disgusting bugs had nothing on the Keaton house when she found the mummified remains of none other than Patrice Keaton ... in a suitcase.

"Ghouls the lot of them," thought Darcy. Even her sister, Harper, was waiting for the details. She knew that Andreus `Mr. Macabre' Woodshall, Patrice's boyfriend, might kill for the Anicula, but he wasn't the only one. Not surprisingly Elodie asked Darcy to "snoop around" and ferret out her mother's killer. A seeker would definitely want the Anicula, but so would a Crafter. The whodunit list was going to be a long one. There were treasures and secrets to be found in the Enchanted Village, but there was also danger lurking. A Peeper Creeper suddenly began to stalk the streets. An unexpected evil tongue lashed out at her. "Stay out of my way, little girl ... you've been warned." Would Darcy be the next one in a suitcase?

This is a fabulous series that everyone from seekers to Wishcrafters will adore. If any cozy mystery could delight and fascinate from the first page to the last, this one certainly did. I loved how the cast of characters developed and intertwined, including the familiars, to create a tight-knit plot. Darcy Merriweather was an unwitting sleuth who more than proved her mettle when it came to nailing down the murderer. The plot was intricate, but smoothly unfolded, exploding with an unexpected twist at the end. This stand alone book is the sequel to It Takes A Witch: A Wishcraft Mystery.

Quill says: If you've been wishing on a star for a fabulously fun, bewitching series, Heather Blake won't disappoint!