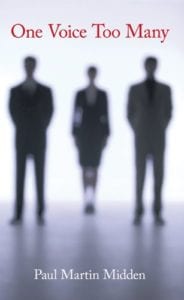 This book is an interesting read, a very intense psychological thriller that moves very quickly but will be difficult for the layman to understand.

To jump ahead a bit, the main character, carpenter Jeremy Walker, was meditating about Emmuanel Swedenborg, an 18th century mystic, on his way to work one morning when there was a traffic jam on the interstate. This abruptly ends his ride to work in the suburbs.  Jeremy walks away from his truck and into a nearby diner, orders a burger and starts screaming hysterically.  The local police take him to a hospital and contact his former wife, Macy.

Back to the beginning.  Jeremy Walker is a very amiable individual, a decent man, a hardworking man but, underneath it all is a past that he can't seem to shake off, including a deep and horrible secret.  He has had a past full of upsets and when he meets Macy, a very attractive divorcee, Jeremy's intention is to make this relationship work.  Macy has also had upsets in her past.  She had been married before and has a daughter.  She tells her daughter, Taylor, about Jeremy and that they are serious about each other. They seem to hit it off and their courtship moves along quickly.  Jeremy is very deeply in love with Macy and they become engaged to be married.  But, even though their future seems secure, his past is always there, hovering over his happiness.  When the hard work and pressures of his new found romance and marriage commence, Jeremy is fighting his internal struggles between his past and his future with Macy.  They do marry quickly and it seems that he wants this relationship to last forever. Sadly, Macy doesn't know about Jeremy's past and his talks with the "Voice" that tells him how to run his life.

As readers have probably figured out by now, the marriage didn't last although Macy was still very concerned about Jeremy's welfare and tried to help him. Unfortunately, Jeremy was so far into the past that can never seem to be pushed to the back burner because of the "Voice."

One Voice Too Many was a very difficult book to understand.  The author, who is a practicing psychologist, goes into the mind of a very troubled man who is trying very hard to have a good marriage with Macy but still relies on a "Voice" in his head to run his life.

Quill says: Readers who like psychological thrillers may enjoy this tale that will have them trying to figure why some folks are just impossible to know.