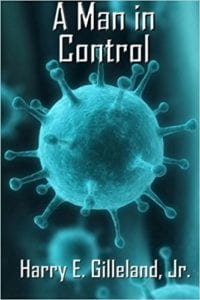 From the very beginning of this tale, readers will certainly understand this author’s choice of title, as Gilleland has hit the nail on the proverbial head with his over-controlling main character, Dave Wynthers.

Dave and Brenda Wynthers are the kind of couple that many others would like to count as friends. Dave is a microbiology professor, giving the two a good life. One of those ‘good things’ comes in the form of a twelfth anniversary celebration, where the two head up to a swank ski lodge where they had gone on their honeymoon.

One of Dave’s ulterior motives for this trip is to coax his wife into considering having a child, while Brenda just wants to enjoy herself and not listen to Dave’s continuous harping. When it gets to be a bit much, she walks out of the lodge on her way to the ski trails, leaving him behind to pout. Sadly, when he finally goes out to look for her, Dave finds that she has had an accident on a very dangerous slope and was killed. David goes back to their home in Fort Collins, Colorado while his twin brother Dan and their mother take over the arrangements for Brenda. In David’s grief, he could hardly remember the services.

Many events follow that David has a difficult time dealing with as he begins to try and handle his job and all of the daily events that are happening around him. A trend begins to form which will let readers understand why the title is perfect. This man is a very controlling person who definitely does want to be in control at all times, no matter how chaotic life becomes.

As things start to happen to Dave and the people around him, including the murder of a person close to him, terrorists who are tracking his every move, a lot of suddenly inherited wealth, the FBI and a female police officer arriving on the scene and more, Dave finds it a little daunting to keep control. Dave is a person who needs to control all aspects of his own life and the lives of the people who orbit around him, and as the story progresses, the reader will see just what that control costs him. A Man in Control is quite fast paced, although at times it seemed as if the author was trying to put too much into the story, sometimes going from one thing to another swiftly so the reader will have to pay close attention to keep up. However, the character development is very good and the plot lines are excellent, making this a very satisfying read.

Quill says: The fact that Dave Wynthers is extremely controlling comes out loud and clear as he works to keep his job, relationships and anything else under his thumb much to the dismay of some of his friends and colleagues. Watching Dave deal with this makes A Man in Control a very good read.