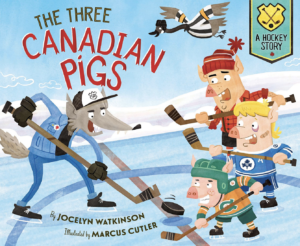 Hockey fans take note - get ready for an hysterical new take on The Three Little Pigs that will have young sports fans shouting in glee.

Three little Canadian piggies were out enjoying a good scrimmage, but how could they know that Wolf was watching them from behind the bushes? As the friends finished their practice, Wolf jumped out and snarled, "It's cold and I'm hungry..." Oh, oh...

The three little Canadian Pigs dashed off to their snow fort and made faces at Wolf from the safety of the second floor of their fort. But were they safe?

"Little pigs! Little pigs! Let me come in!"
"Not by the pads on our shinny-shin-shins!"
"Then I'll huff and I'll puff and I'll blow your house down!"
"No way! It's the sturdiest snow fort in town!"

But when Wolf enlists the help of his friends to take down the snow fort - Moose and Bear - things don't look good for the pigs. So they decide to settle things the Canadian way...

"Stop!!!!" yelled the pigs as they braved the attack. "We're not gonna take this! We're gonna fight back! Let's settle this fight the Canadian way...a hockey game showdown! Get ready to play!" Will the three little pigs be able to outwit, or outplay, Wolf and his friends?

Great illustrations adding to a fantastical, and wildly fun hockey story will have young hockey fans reading this book over and over. The tale didn't end when the game ended, but rather when all sides came together after the game. It's a good lesson in getting along, wrapped in a super fun hockey game story. If you have young sports fans in your house, check out this book. They'll love it!

Quill says: What a fun new take on a well-known tale! Canadian Pigs are pigs that wolves shouldn't mess with - and children will love cheering for them!

S is for the Stanley Cup: A Hockey Championship Alphabet

Saving Baby: How One Woman’s Love for a Racehorse Led to Her Redemption

Sports Illustrated Kids All NEW Access: Your Behind-the-Scenes Pass to the Coolest Things in Sports

Sports Illustrated Kids Big Book of Who: ALL-STARS: The 101 Stars Every Fan Needs to Know

TIME For Kids Book of Why - Amazing Sports and Science

Duel for the Crown: Affirmed, Alydar, and Racing's Greatest Rivalry

Sports Illustrated Kids: The TOP 10 of Everything in Sports

The Main Event: The Moves and Muscle of Pro Wrestling

The Golf Swing: It's All in the Hands

I Love the Red Sox/I Hate the Yankees

Out of Control (Travel Team)

SCORE!: The Action and Artistry of Hockey’s Magnificent Moment

Albert Pujols: MVP on and Off the Field (Sports Stars With Heart)

Babe Ruth and the Baseball Curse

The Prince of Fenway Park