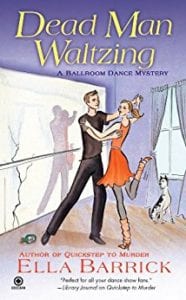 Anastasia “Stacy” Graysin was once again back on the job teaching an assortment of dance classes with her partner, Maurice Goldberg, in her ballroom dance studio, Graysin Motion. The memory of her dead, philandering former co-owner and ex-fiancé, Rafe Acosta, was something she’d rather forget. He was long gone and hopefully soon forgotten, but the memory of the thud of his body hitting her ballroom wall was almost as grating as the sound of her “rhythm-challenged” dancers trying to do the cha-cha-chá when they were supposed to be waltzing. Stacy woulda if she coulda murdered him, but alas the job thankfully fell to someone else.

Detective Lissy, who’d been anxious to pin that murder on Stacy, suddenly appeared in the studio and he wasn’t looking for dance lessons...he was looking for Maurice. By some unfortunate coincidence, Maurice had been having lunch with Corinne Blakely, the “grande dame of American ballroom dancing,” when she collapsed and died. Corinne, who was as discriminating in the love department as Zsa Zsa Gabor and had almost as many husbands (including Maurice), had been poisoned. The thought of him murdering anyone was simply ludicrous in anyone’s book. Vitaly Voloshin, one of Stacy’s dance partners claimed, “You should proving.” She didn’t have a moment to waste.

It seemed that Corinne had penned one of those tell-all-leave-nothing-out memoirs entitled “Step by Step” and she wasn’t discussing ballroom dancing. Marco Ingelido, a supposed lover of Corinne’s, suddenly became highly interested in the manuscript as were several other people, including those husbands of hers. Greta Monk, who couldn’t dance, but could dole out hubby’s money, had a “starring role in her upcoming book,” and was all in a dither. Grandson Turner Blakely was counting his inheritance while the housekeeper, Mrs. Laughlin, was putting hers in a suitcase. Would someone be willing to kill in order to get that manuscript? Would Stacy be able to prove Maurice’s innocence before he ended up in the slammer?

This dazzling mystery is as fun, peppy, and as delightfully complicated as a ballroom-rumba. Detective Lissy simply drifts off into the background and more than capable Stacy takes charge of the investigation. Naturally, as a girly girl, she often has to let down her chignon before she gets to work. Stacy definitely gives new meaning to the term “woman sleuth” with her totally feminine, determined attitude toward solving this whodunit. The light soap opera lilt to the tale with the twirling skirts and skirmishes throughout the pages will keep the reader hungering for more. If you’re looking for a fun, relaxing cozy, look no further!

Quill says: This is the perfect cozy mystery to dance your way into summer, especially while you stick your toes in the sand at the beach!