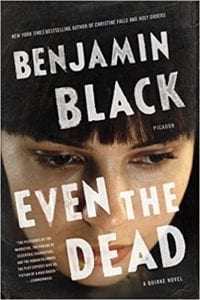 Quirke had been working at the Hospital of the Holy Family as the chief pathologist until something went wrong. Absence seizures and mild hallucinations didn’t do him any favors. “Something has happened to me,” he explained to his one-time lover and sister-in-law, Rose, “something has-gone out.” He was living with his adoptive brother, Mal, and Rose of course. Dr. David Sinclair, the chief consulting pathologist, was definitely going to have his job if he didn’t recover quickly. To add insult to injury, Sinclair was dating Quirke’s daughter, Phoebe. It was all so very complicated and unnecessarily cozy, really. There was, however, a body on the mortuary slab that needed a second opinion, one that Quirke needed to take a look at.

Such things as accidents do happen and there was a young man who probably committed suicide in Phoenix Park. Sinclair had the somewhat distasteful job of examining the body, but noticed a slight indentation in the side of his head, a fact that Quirke was concurred with. It looked suspicious, “the result of a deliberate and savage blow.” Before Leon Corless hit that tree, someone dealt that blow, doused everything in petrol, and somehow sent that car down an incline into that tree. No doubt they were looking at a murder, a murder Quirke would set aside his neurological issues to investigate. Detective Inspector Hackett would be more than willing to share a drink or two and work on the case.

Leon was just a twenty-something kid, sans any enemies who wanted him to slam into that tree. On the other hand his father, Sam Corless, was a Trotskyite troublemaker.”Would Corless have enemies,” he asked Quirke, “vengeful enough to kill his son?” Maybe, but then again Leon was working in a rather sensitive government area himself. Something to do with women and babies, but what possible secrets could Leon be harboring? Surely it wouldn’t warrant the death sentence he received. The real twist was when Leon’s girlfriend, Lisa Smith, contacted Phoebe. There was little connection between the two, save a single class, but Lisa was wildly desperate and needed Phoebe’s help.

Sinclair didn’t think that Sam Corless looked “like much of a threat to the institutions of the state,” when he lifted the sheet so he could identify his son. It would soon become apparent that there was more to the case than either Quirke or Hackett could have imagined. Phoebe had squirreled Lisa away in the house in Ballytubber, a safe haven for anyone, or so she thought. Someone was threatened by that murdered corpse, Lisa’s lover, because she vanished without so much as a trace. There was absolutely nothing to indicate anyone had been there at all. Was Lisa Smith some sort of figment of Phoebe’s imagination? A Quirke-like genetic hallucination? There was no one named Lisa on the roster in Phoebe’s class. There was a dangerous enemy out there, but just who was it?

I do love a good ending and Even the Dead had a killer, one that made the read well worth it. This novel can stand alone, but barely. I would have enjoyed it much more had I been privy to the others in the series. The pace of this work was even, nicely building up to the “whys” of the mystery. This is forensic crime fiction, but the clues on the body pointed to an unknown killer who only arrived on the scene in the latter pages of the book. For me, it felt as if Quirke and Hackett stepped out of a movie...film noire...into the pages of this book. I could almost tell that this particular novel was / is a turning point in Quirke’s character with the promise of future love, the rekindling of life in a man worn down by everything around him. For me, it will be a time to look back into Quirke’s past by reading the others in the series. For others, I’m sure they’ll be anxiously awaiting the next in the series from Quirke, a man who has discovered things about himself and his past.

Quill says: This is a powerful mystery, one of not only political and church intrigue, but that of an inimitable detective...Quirke.