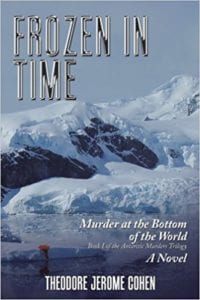 Ted Stone would often rub a six-inch scar on his leg, a scar that could easily take his mind back in time more than forty years. It was a time of murder, mayhem, yet a time when memories of accomplishment could just as easily be tucked in the folds of adventure on the North Antarctic Peninsula in February of 1962. It was an austral summer that would become as ingrained in his mind as much as the scar on his leg. Ted, a young grad student at the University of Wisconsin, was going to help fellow student, Canadian Grant Morris, collect much needed rock and fossil specimens needed for his doctoral dissertation. Dr. Woollard also knew when opportunity came knocking and quickly convinced Ted of “the importance of the International Gravity Network and the need to acquire additional data at the end of the North Antarctic Peninsula.” (pg. 25) Ted realized he might be taking on too much, but a Worden gravimeter was added to his packing list.

Two years before the expedition, an earthquake measuring 9.5 on the Richter scale rocked Chile on May 22, 1960, but at the same time a country was feeling the devastation nature can wreak, two men stepped forward to lay claim to unimaginable treasure. Two Chilean NCOs, Raul Lucero and Eduardo Bellolio, worked late into the night rifling the safety deposit boxes in the Banco Central de Chile vault, a vault they should have been guarding. The riches were indescribable...imagine an 18K yellow gold Patek Phillipe simply there for the taking. After secreting their cache, the two heavily tattooed thugs would hide behind their jobs, jobs that would later bring them in contact with a young gringo, Ted Stone.

The team from the University was prepared to work and had made provisions for survival in an unforgiving climate, but they were unprepared for something else at Base Bernardo O’Higgins. The evil was on the move with them as Lucero and Bellolio too made their voyage to that “wind- and snow-swept outpost on the North Antarctic Peninsula...one of the oldest, permanent bases on the frozen continent.” (pg. 89) Meanwhile, Ted began to take readings with the gravimeter to tie his station into the Antarctic Gravity Network and Grant began to see great possibilities in the bleak landscape.

The team began to work, yet were totally unaware of the danger that hung over their heads. Lucero and Bellolio met on the ice, but a third man decided to push the envelope and blackmail them. The business at hand was to kill seals because the dog team needed to be fed. Yes, yes. He could have more money. The bloody seal lay next to the blackmailer. Lucero and Bellolio boarded the launch leaving him behind. “One by one the orcas placed their heads on the iceberg, attempting to use their weight to tip the ‘seals’ into the water.” (pg. 109) The blood had begun to flow at the bottom of the earth. Who would be next? Were the treasures of Chile worth the lives of all on the expedition? The echoes of Captain Robert F. Scott’s voice were almost palpable as the landscape roared, “Great God! This is an awful place!”

This marvelous blend of long ago memories and fiction slowly draw the reader down to the end of the earth and onto the Continental Glacier where a small group of men suddenly found themselves unexpectedly fighting for their very existence. The tale does not thrust the reader into the crashing waves of drama immediately, but rather draws him in slowly. One of the things I liked most about this book was the leisurely way in which I found myself voyaging south right along with the team. With the descriptive passages of the landscape and the unforgiving climate one can almost picture Sir Ernest Shackleton working and struggling alongside the young men as they worked. The twists and turns of this adventurous mystery were not immediately evident, but rather surfaced toward the end of the book. There are several black and white photographs interspersed throughout the book that created a wistfully nostalgic view of this adventure. Numerous footnotes are included for those interested in knowing more about topics mentioned in the book.

Quill says: If you like your fiction to read like dramatic nonfiction, Theodore Jerome Cohen will be more than willing to accommodate your request as he takes you to the bottom of the Earth where you’ll find murder and mayhem blended with a dash of chilling drama!

For more information on Frozen in Time: Murder at the Bottom of the World, please visit the book's website at: TheodoreCohenNovels.com