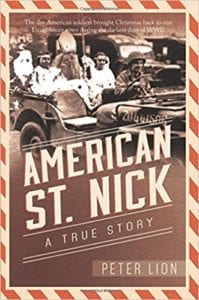 American St. Nick is an unforgettable story concerning our troops who were stationed in Europe in WWII toward the end of the war.

This particular tale is about American soldiers from the 28th Infantry Division who were stationed in the village of Wiltz, Luxembourg in December of the year 1944. Two members of this Division were really missing Christmas and knowing that they would not be home for the holidays were determined to celebrate the holidays in Wiltz. And so, they did, taking gifts donated by soldiers from the Division, which they gave to the town’s children at a St. Nicholas Day party on December 6th, which was complete with a visit from St. Nicholas (the Saint was a soldier dressed in a Bishop’s vestments along with a Bishop’s miter).

When the town of Wiltz was all but blown to smithereens, which was ten days after the party, during the infamous Battle of the Bulge, there were many casualties. Some of those who survived were people who, during the years after this awful battle, never forgot their American St. Nicholas and the GI’s who took him to the town. The people who were left wanted to find the GI’s and searched for them for many years. After more than thirty years, the prayers of the people of Wiltz found some of the saviors, particularly the first American St. Nicholas who was found and returned to Wiltz on St. Nicholas Day.

The author of this wonderful story, Peter Lion, heard the story of the American St. Nicholas in 1994, and states, “My friend, Terry Brookins, was preparing for a trip to Europe with his family, heading to Luxembourg with his dad and telling Lion that his dad is going to do this thing in a town called Wiltz and proceeded to tell Lion the tale of this wonderful story.” Which is why this book was written.

This story, that was soon overcome by the war, was never forgotten as this day reached out many years later to grab the hearts of the generations of Americans who honor the people who are still here and the memory of those people who stayed.

Quill says: The book is overflowing with memories as the story jumps from the pages, taking readers into the streets of Wiltz in 1944.