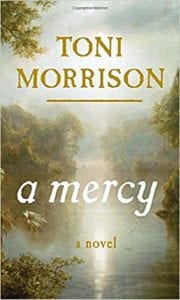 Nobel Laureate Toni Morrison, best known for her mesmerizing Beloved has penned her most recent novel, A Mercy, about the turbulent times surrounding the birth of our nation, through the eyes of several downtrodden characters.

Jacob Vaark owns a small farm in upstate New York. He abhors slavery but purchases a young Native American, Lina, who is the sole survivor of her village after a smallpox epidemic kills all around her. Jacob also purchases a wife, Rebekka, from England. At first, his wife and Lina don’t get along, but with the harsh realities of life in the 1690s, they soon come to depend on and love each other. Sorrow, a slave girl who Jacob rescued from a bad situation, struggles to fit into this small, disjointed family. Florens, yet another young slave, is given to Jacob in exchange for a debt owed by a rich landholder.

A Mercy follows the internal struggles of each person. Jacob is clearly conflicted by his ownership of slaves, “God help me if this is not the most wretched business,” yet it is thanks to slaves that he is able to stay above the financial fray. Florens, a tortured soul who is never able to come to terms with being given up by her mother feels betrayed.

The weaving together of these lives and how they survive on a daily basis in a world where almost all people are for sale, makes for a fascinating read. It is an absorbing look at our country in its infancy when rules were still being written, and landowners used and then discarded other people without a thought. The difficulty with “A Mercy” is in the way the story is told. It is disjointed with story lines starting and abruptly ending for no apparent reason, making it quite difficult to follow. For instance, the first chapter is a recounting by Florens of her “adoption” by Jacob, although he is referred to as “Sir” and never Jacob. The second chapter then jumps to the same event, but through Jacob’s eyes. The reader has no idea who is telling the narrative, or that this is the same incident until quite late in the chapter.

Much of A Mercy is told in the third person and these sections are the easiest to follow while those told by Florens, the slave girl, require careful reading. Her sections are written in her voice and use language such as: “Or when a corn-husk doll sitting on a shelf is soon splaying in the corner of a room and the wicked of how it got there is plain,” or “Night is thick no stars anyplace but sudden the moon moves. The chafe of needles is too much hurt and there is no resting there at all.” You come to understand the cadence, but it takes work.

There is much to admire in this book, including the touching chapter recounting Rebekka’s life. The choices she is faced with, “…her prospects were servant, prostitute, wife, and although horrible stories were told about each of those careers, the last one seemed safest,” bring the stark realities of life in the 1690s to light. The final chapter concludes in such a chilling way, particularly for Florens, to make the struggle of staying with the difficult text, worthwhile.

Quill says: A compelling story that is very difficult to follow at times.