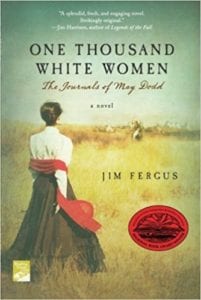 In 1854, President Ulysses Grant attended a Native American peace conference during which a Cheyenne chief named Little Wolf offered to trade 1,000 of his horses for 1,000 white brides for his tribesmen. Little Wolf hoped that the white women would help his people assimilate to the white man's way of life before there were no more buffalo to hunt. Grant rejected this proposition, but Jim Fergus' novel, One Thousand White Women: The Journals of May Dodd, follows what would have happened if Grant's response had been in the affirmative. Grant's fictional approval was based on the hopes that the women would convince the Cheyenne to move to reservations so that white settlers could peacefully live upon land formerly inhabited by the Native Americans and exploit the land for its resources.

May Dodd is in the first group of white women to marry and live among the Cheyenne. She writes in her journal, "...we are contractually obligated to bear but one child with our Indian husbands, after which time we are free to go, or stay as we choose. Should we fail to become with child, we are required to remain with our husbands for two full years, after which time we are free to do as we wish...or, at least, so say the authorities." All the women who sign up for the Brides for Indians program do so voluntarily, some to escape poverty, others to win freedom from jail, and still others, like May, to win release from a lunatic asylum. May, a woman of good breeding, had been committed to the asylum by her parents who felt she must be insane after she cohabitated with a man below her social stature and bore him two children.

Through diary entries and letters, Fergus' story traces the adventures of May and her new-found friends as they leave Chicago bound for the Nebraska prairie and their Cheyenne husbands. May's writings vividly capture the colorful personalities of her companions, along with their dialects--the Irish brogues of the Kelly sisters, the southern drawl of Daisy Lovelace, the Swiss cant of Gretchen Fathauer.

While the women hope to teach American customs to the Cheyenne, as months pass, it is apparent that for some, the reverse occurs: Many of the brides adopt the Cheyenne way of life, though others find reasons to defect.

Through brilliant writing that includes romance, violence, and the challenges of Mother Nature, Fergus shows us May’s inner struggle of straddling the worlds of the white man and the Cheyenne.

Quill says: This story will raise emotions you never knew you had. Read it.