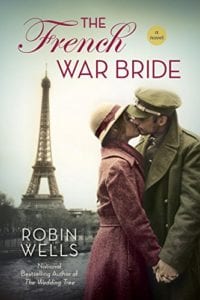 What would you do if the man you were engaged to marry went to serve overseas and came home with a war bride and a baby? Would you freak out, be bitter, and refuse to hear anyone’s side of what happened? Probably all of the above. This is exactly what Kat Thompson did. In the midst of wedding planning, her soon-to-be husband, Dr. Jack O’Connor, met a woman named Amélie in France during World War II and brought her home to Wedding Tree, Louisiana - already married and with a baby. As is the case in small towns, this was a huge scandal which embarrassed Kat and left her bitter and resentful, mostly at Amélie. Without finding out what had really gone on, Kat left Wedding Tree and ended up marrying and living a happy life, as much as she could without her high-school-sweetheart ex-fiance, Jack.

Years later, after a cancer diagnosis and not long left to live, it is time for Kat to find the truth of what really happened all of those years ago. Are things always what they had seemed to be? Are they ever? The French War Bride is a novel that will make you realize that things are not always what you think they are and that things are not always what they seem to be. It will make you question what is right, what is wrong, and make you think about the gray area in-between. What would you do in times of war that you would not otherwise do and is it right to act based on the circumstances and the cards you're dealt? It is time for Kat to find out if she can truly forgive and let go of the past bitterness and hatred so that her eternal soul can rest in peace.

The French War Bride is not only historically enticing, but wildly addicting. The story of Kat and Amélie’s past and how they are intertwined will add an element of mystery to this historical romance. I found the way that the story began was effective and allowed the actual plot to thicken right from the beginning. Instead of being a drawn out and hard-to-get-into book, the way in which it is written makes it read as though you are actually having a conversation. In an historical novel like this, I feel as though it is important to convey history in a way that makes readers feel as though they are being spoken to, not at. The fact that The French War Bride had an element of story and history that were expertly intertwined allowed the reader to feel like they were learning without being taught, which is probably most of the reason that I could not put it down. That, and the fact that the characters were so relatable and easy to like, once you really got to know them. Upon hearing both of Kat and Amélie’s points of view, I could not help but wonder what I would have done in both of their situations and just how much what was going on in the world would have affected my decisions. I do hope that there will be many more books by Robin Wells in the near future. One thing is for certain, I must have them all.

Quill says: The French War Bride is a thought-provoking and historically accurate novel that will leave readers unable to put the book down.