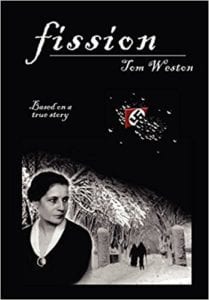 Fission by Tom Weston is a very inspiring story that will stay in your mind long after reading. The main character, Lise Meitner, has a PhD in Physics, which was quite an accomplishment during the early twentieth century. At that time, women scientists really were ignored in Vienna (where she lived) as well as throughout Europe, and only thought of as marriage material. A brilliant woman scientist like Lise was considered quite an anomaly. While this story is somewhat fictional, it is based on the true story of Lise’s life.

Lise was born on November 7, 1878, in Vienna, Austria. She was the third of eight children born into a Jewish family. She attended the University of Vienna in 1901 and studied Physics under Ludwig Boltzmann, a fantastic teacher and loved by many in Austria. When Lise received her PhD, she went on to Berlin to study with Max Planck. Her family was against this as they wanted her to stop her education and get a job teaching or get married and give them grandchildren. But Lise was adamant about studying in Berlin and wanted to work with Otto Hahn, who was a chemist at the University. They worked together for many years and developed the Hahn-Meitner Research Department at Kaiser Wilhelm Institute for Chemistry in Berlin. They studied radioactivity and, with her knowledge of physics and his of chemistry, discovered a new element; protactinium. During World War I, Lise found herself working as an X-Ray technician. When she came back to the Institute at the end of the war she discovered that many of her scientific accomplishments were not recognized — she didn't even get credit for being the assistant on some of these projects.

When Austria was taken over by German troops in 1938, Lise was forced to leave the institute because of Germany’s bias against Jewish people. She thought she had immunity from this prejudice because she was born in Austria, but Hitler’s government didn’t agree. She was smuggled out of Germany and into Denmark and then had to flee to Sweden when the Germans entered Denmark. She continued her work in Stockholm but had little or no support because of the prejudice that existed against women working in the scientific fields. She and her old partner, Otto Hahn, met secretly in Denmark to plan a new round of experiments. Lise came up with the solution that explained nuclear fission but because the experiments were done at Hahn’s lab in Berlin, again she lost credit while Hahn published the results in the year 1936.

In February, 1939, Lise published the physical explanation for the experiments along with her nephew, Otto (Robert) Frisch, and called the discovery nuclear fission. When this process became known in the scientific community, Albert Einstein wrote a letter to President Franklin D. Roosevelt warning him of the devastation this discovery could cause. As is well known, it resulted in the Manhattan Project that built the atomic bomb. Hahn was awarded the Nobel Prize for nuclear fission in 1944 but Meitner was never recognized for her work even though her nephew hounded the committee for years asking them to honor Lise.

In 1992, the heaviest known element in the universe was named Meitnerium (Mt) in Lise Mitner’s honor. This woman scientist gave her whole life to the study of physics and always tried to think of all the good her discovery could do in spite of the horrendous use that it was put to in war time. Fission is a story of danger and desire for power that took the lives of many innocent people. In the center of all this was a little woman with a big brain who was ignored by many, including family and friends. The author does a fantastic job of writing about Lise's life and adding many personal notes without suggesting that physics was the only thing she thought of. For readers who shy away from scientific books, take note — this is not a story bogged down in technical jargon but an exciting story of discoveries as well as the hardships of war. In short, Fission is a compelling story about one woman’s dedication to science.

Quill Says: A larger than life story of a real person who made a real difference and, as her headstone reads: "Lise Meitner: a physicist who never lost her humanity."

For more information on Fission, please visit the author's website at: www.tom-weston.com