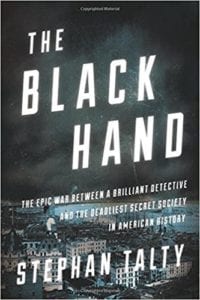 Joseph Petrosino was an Italian immigrant. He arrived in New York with his family when he was just a teen. His father, like many immigrants, had the mindset of making a better life in America. Upon arriving, Petrosino continued his schooling. Although he went longer than most, he ultimately quit in the sixth grade. After quitting school, he immediately went to work in order to help support his family.

After leaving school, Joe became a shoe shiner. Here, Joe was able to make enough money to help support his family. Even though it was work, Joe wanted more. He wanted to work where he would have a place to advance. Knowing he wanted more, he abruptly quit his shoe shiner job and looked for work elsewhere. During this time he worked many jobs and traveled all over the country, before returning to New York. Upon returning to New York he began working for the sanitation department as a street cleaner. Because the sanitation department was being run by the police department, Joe felt there were advancement opportunities. He worked hard and soon saw himself moving up. With his new promotion, he was in charge of the boat that took the trash away from the city. One day while Joe was working, the officer who was in charge of Joe's department watched him work. After watching Joe work, the officer asked if Joe wanted to join the police force. This was the major advancement that Joe was looking for.

As an officer, Joseph continued to work hard and was soon a well-known detective. People often knew him by his last name. With his great track record and his ethnic background, he soon landed the job of dealing with the Black Hand society (a mafia-like organization). With this Joseph saw many struggles when it came to investigating this group. In the beginning of this investigation, Joseph didn’t have a lot of help. The general thought about the Black Hand society was that it wasn’t a big threat. Although Joe truly cared about helping the victims of this secret group, he was running out of resources. After many discussions with the police chief, he was finally able to set up a task force. After setting up the force, Joe’s team still wasn’t treated equally. His team was not given the same respect or resources as the other officers. Since they were not given the same resources, they had to work harder in order to take on the society on their own. Although it was a hard battle, Joseph and his team took the investigation of the Black Hand Society head on.

The Black Hand is a very informative read. It wraps a history lesson into a good story with interesting characters. For me, it was great to learn about a part of history that I have never heard of before. The book was well written and definitely a page turner. Every page kept me reading and wanting to know more about this secret society.

Quill says: The Black Hand will give you insights into an intriguing part of history that is often overlooked.