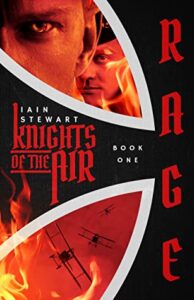 When we first meet Lance Fitch in 1914, he is an English farmer and hunter who happens to live in what was once known as German East Africa. He has almost reached manhood with no idea what sort of trade he might pursue, his greatest skills being handling and shooting a rifle. When war breaks out in Europe, it will be the Germans against the English, as the local askaris (soldiers) are swift to demonstrate. Before long, they have taken Lance, his brother Francis, and their African companion, Hamisi, prisoner. Sadistic torture ensues. Lance will escape, cruelly wounded but wiser, obsessed with the need for blind revenge. He will get his chance and though it weighs upon him, he ensures that the German who caused such havoc will suffer and die.

The next natural step for Lance is to join the English armed forces, and the next year finds him on the war-ravaged Western Front, where he will see his second brother killed in battle. As battles take to the skies, Fitch, now part of the British Royal Flying Corps, is chosen as a cold-blooded artilleryman, perched in the front of a small aircraft, handling two machine guns, one to fire forward, the other, backwards. It is tough work, and the Germans have superior equipment. Nonetheless, Fitch is a deadeye shot and is soon identified as a good candidate to work in tandem with Major Arthur Wolsey, an aristocrat who bonds with the rough-cut young man from the bush when Fitch unerringly saves both their lives. Fitch will move upward in the hierarchy, forced to hobnob with the military elites. The technologies change swiftly, and Fitch seems as keen to improve the smallest technical glitches in the crafts he must fly as to socialize with the officers…until he meets Megan.

Author Stewart has based this tale, the first in a series, on hard facts drawn from the annals of the war and the technical development of warfare in the skies. There are real people woven into his plot and a chronology that roughly follows actual events. He, like Fitch, grew up in East Africa, with smatterings of Swahili and other touches adding authenticity to that portion of his story. Significantly, also, he obtained a pilot’s license as a teen. His book, while focused on manly deeds on earth and sky, also includes many references to classical literature, allowing Fitch to approach a coming battle with Tennyson on his mind: “Theirs but to do and die.” He offers Historical Notes for the reader to bind together the facts with his imaginative storytelling. By the end of Book One, Stewart shows Fitch as having integrated better than he could have anticipated with the brass, but still feeling the curse of killing, seeing “a lot of dead Huns” as his only legacy. The possibilities before him beg a sequel, foreseen and designed by the author.

Quill says: Wrapping World War I and aeronautic history around the personal struggles of some of the men who lived it up close, Iain Stewart has created a cinematic viewpoint as seen through the career of a dedicated, determined, vengeful loner.

For more information on Knights of the Air, Book 1: Rage!, please visit the book's GoodReads page.