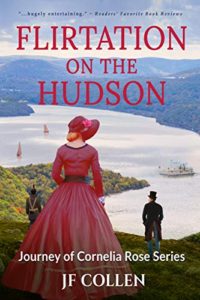 In this first installment of the Journey of Cornelia Rose series, J.F. Collen treats her audience to an engaging adventure by way of the antics of precocious main character, Cornelia (Nellie) Rose Entwhistle.

The story opens in Manhattan, October 1842. Nellie is a child of privilege and her curiosity is boundless. She is quite proud of her father’s accomplishments. He is the esteemed inventor of the new water system for the entire city of New York. The Entwhistle family will attend the grand celebration soon in honor of her father’s achievements. If only she could fashion her behavior more suitable and akin to her demure sister Anastasia. Or perhaps she could demonstrate a bolder side like that of her sister Agnes, but not nearly as abrasive. Nellie couldn’t quite understand why Agnes seemed to be the one always in mother’s favor. Unable to sleep with the anticipation of the grand celebration the next day, Nellie tiptoes out of her bedroom and toward the voices. When she overhears the heated discussion between her mother and Grandmama Pffernuss, she is dismayed to learn her Grandmama’s true feelings toward her beloved father.

The years cascade forward and Nellie is beside herself knowing that sister Agnes will be a debutante at Mrs. Warden’s Harvest Ball. Much to Nellie’s dismay, she would remain a wallflower to such grandeur. Granted, she is only 12 years and 10 months. Can’t that be close enough to 13? Nellie is enraged that her mother was sticking so closely to silly Mrs. Warden’s rule that in order to attend the ball as a debutant, the young lady must be 13 years of age. Yet another lecture was bestowed upon Nellie from her mother who insistently highlighted the reality that many things in life were not fair and it would benefit Nellie if she learned this lesson sooner rather than later.

All wonderful things come to those who are patient and at long last, Nellie is permitted to attend Camplands with her dear friend Augusta Van Cortlandt alongside Augusta’s mother as chaperone. After all, it was unseemly for a young lady to go anywhere unattended without a proper escort. When Nellie and Augusta are separated after the evening festivities, Nellie has the good fortune to meet the dreamy and quite enchanting Obadiah Wright, a fine West Point Cadet. Little did Nellie know that this chance meeting was a life changing occurrence that would dictate Nellie’s eventual destiny.

I was immediately captivated with this story, particularly given the period it was set in and the area where it takes place. It is the late 1800s and the Hudson River Valley history was beautifully woven into the story line. J.F. Collen does a fantastic job of capturing the dialect of the time as much as the etiquette and conduct of what was required to be a lady of those times. She guides her audience on a delicious ride of whimsical flirtations and shenanigans through the coquettish antics of main character, Nellie. She artfully knows when to pull Nellie back with her forwardness just when the reader anticipates she is about to cross a line. Even in the 1800s there were scoundrels lurking in the shadows to take advantage of unsuspecting damsels and yet, Collen plays out tasteful scenes in confident artistry through superb word placement. Nellie Entwhistle is a richly developed character with personality personified and I look forward to the next book in this delightful series. Well done! I am a fan.

Quill says: Flirtation on the Hudson is a terrific tale centered around a coming-of-age story of a young lady who certainly evolves into quite the woman of substance.

For more information on Flirtation on the Hudson, please visit the author's website at: www.jfcollen.com