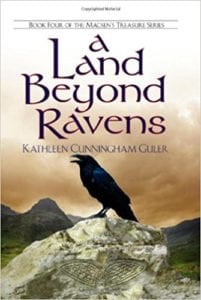 If you’ve read the first three books in Kathleen Cunningham Guler’s Macsen’s Treasure Series, you will not require any encouragement to pick up the fourth book in the series, A Land Beyond Ravens. No doubt you already are hooked on the action and intrigue surrounding fifth century spy Marcus ap Iorwerth. However if you haven’t yet discovered the series, A Land Beyond Ravens should be on your map if you enjoy fantasy and the Celtic legendary history of King Arthur. In fact even if your book genre interests extend beyond those categories, you may still want to sink your teeth into Guler’s series. For although A Land Beyond Ravens is classified as historical fiction, it gracefully incorporates other genres, such as mystery, romance, action-adventure, and fantasy. If you are a fan of Diane Gabaldon’s Outlander series, then you will enjoy the same scrumptious mix of historical context, exciting escapades and tender moments in A Land Beyond Ravens.

As the high king Uther’s health deteriorates, cunning spy Marcus ap Iorwerth wrestles with rogue king Cadwallon over control of the kingdom. Marcus is an expert swordsman and spy with keen intelligence, plus he’s a romantic who is utterly devoted to his wife Claerwen. In a phrase, Marcus ap Iorwerth is a fifth century James Bond, and he must utilize all his many skills to make sure Uther’s secret son, Arthur, succeeds his father as king. Unbeknownst to Cadwallon and the others of the kingdom, Merlin the Enchanter has been grooming the boy Arthur for just this eventuality. But perhaps the young man is still too immature to hold such a weighty position while fending off others who will fight to the death to usurp his power? Add to the mix, a land battle between the Britons and the Saxon, throw in a dash of religious inquiry as the “new” Christian religion becomes introduced to the primarily Druid kingdom, and then sprinkle a generous serving of a love story about the affection, respect and honor shared between two strong people, and you have the zesty ingredients for A Land Beyond Ravens. As Marcus ponders, “So many years had passed, waiting for the moment. But it had to be the right moment. Arthur may be good – he had just proven he understood tactics well – but that could have been luck alone. Arthur was still so young…And time was running out…”

As readers piece together clues, the suspense surrounding Arthur’s possible ascension to the throne easily maintains interest throughout this well-paced novel. The story is chocked full of tasty morsels of period details, and the addition of the Welsh language lends historical veracity and flavor. Guler’s solid descriptive writing style gives good weight to both details and plot as she integrates neat summaries of the plotlines of earlier books in the series. In a clever manner, the author creates individual books that can stand alone as well as a series. As Guler writes in the author’s note, “I wished to portray a period of history through the eyes of people who could have lived then and set the events that led to Arthur’s rise to power as an influence upon their lives. Each book in the series can be read alone; the prominent characters, chronology, themes and background tie them together.”

However if you enjoy one book in this The Macsen’s Treasure Series, Merlin himself couldn’t stop you from hunting up the rest.

Quill says: A must-read for fans of Celtic history with a taste for intrigue, romance and swordplay!

For more information on A Land Beyond Ravens, please visit the publisher's website at: Bardsong Press.