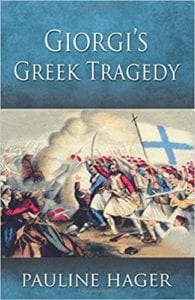 Giorgi’s Greek Tragedy is an historical novel recounting the events leading up to, and including, Greece’s fight for independence from the suffocating rule of the Ottoman Turks. Seen through the eyes of several family members, the reader is carried along as the family struggles at the hands of their Turkish rulers.

The author opens her story with a look at life in a quaint Greek village in 1790. We see how hard the men work to provide for their families, what the women must do to keep home life running smoothly, and how children contribute. The reader is given a glimpse of wedding customs and how tradition determined so much in the lives of Greek peasants.

The idyllic village life is first interrupted by Turkish tax collectors, then later in the same chapter by the Sultan’s Janissary Corps. The Corps were known for making infamous “child gatherings” trips where they would select healthy Greek children and take them away to be raised to fight for the Sultan. On one such trip, the Corps selects young Panos Papakalos for this “privilege.” When his parents try to stop the kidnapping, they are ruthlessly killed by the Turkish scouts. Fortunately, the other two sons, Giorgi and Yianni, are off playing and avoided the terror that visited the house that day. But when they returned later and discovered the bloodshed, their lives are forever changed. Young Giorgi is soon obsessed with punishing the murderers and vows to one day get revenge.

The bulk of Giorgi’s Greek Tragedy follows Giorgi and Yianni as they run off and join the kleftes (Freedom Fighters), hoping to join up with Kapetan Zaharias Barbitsiotis, the leader of the rebels, and avenge their parents’ murder. After a brief stint in a training camp, the boys are soon in the middle of the fight for freedom. Giorgi quickly learns to relish the killing of Turks, but Yianni prefers the quiet of reading and writing poetry.

Life is hard for the young fighters and many Greek rebels die from both the harsh living conditions and the Turk’s swords. But the overbearing rule of the Turks has hardened the young men’s hearts and they willingly fight on.

It is apparent that the author did her research and is fascinated by the Greek fight for independence. She has included many details about the Freedom Fighters' lives, and has even included a glimpse of the hardships military animals, such as pack mules, faced. For those who get squeamish reading detailed fighting scenes, take note, this book focuses much more on the daily lives of soldiers and their families, and avoids gory battle scenes.

Although the history is central to the narrative, the characters’ stories sometimes get lost as the historical events take over. For example, the boys' search for the Freedom Fighters is interrupted by an old man's tale about brave Kapetan Zaharias and later a priest tells them about a castle at Mystras in 1259. At these points, the reader may feel like they are attending a lecture on Greek history rather than reading an account of two boys growing to manhood as they fight for their country’s freedom. But when the story gets back on track, the action quickly picks up.

Quill says: This tale is a good introduction to the events surrounding Greece’s struggle for independence seen mainly through the eyes of two brothers.