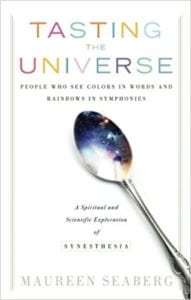 Letters are colored, musical notes have shapes and for some people, sounds have certain tastes. Sound like ideas out of a fantasy novel? Actually, these are examples of the experiences that “Synesthetes” encounter every day.

According to Wikipedia, Synesthesia “is a neurologically-based condition in which stimulation of one sensory or cognitive pathway leads to automatic, involuntary experiences in a second sensory or cognitive pathway.” Says author Maureen Seaberg, a synesthete who has seen colors in letters all her life, there is so much more to synesthesia than a simple mis-wiring of neurons. It isn’t a disability, nor is it an “annoyance or a hindrance…” but instead, provides “additional information rather than a replacement for the main information I need to function properly. It is mostly a welcome background impression, a kind of music that is always with me.” (pg. 22)

Tasting the Universe begins with an introduction to the world of synesthesia. The author gives an overview of what it is, and isn’t, and then details her own childhood. We learn of her slow awakening to synesthesia, how she thought all people saw the colors of the universe in letters and numbers, and knew that each day of the week had a different color. Not much was known about synesthesia at the time and Seaberg learned to deal with her unique interpretation of things around her. It wasn’t until twenty odd years later when she walked into a store and saw a book on synesthesia that things started to fall into place. That book opened a new world for Seaberg and her journey of spiritual and scientific exploration into synesthesia began in earnest.

This book is a blend of interviews with synesthetes (ex. Itzhak Perlman), well-known personalities of the past who may have had synesthesia such as Marilyn Monroe and Beethoven, a look at the history of synesthesia, how science has interpreted it, and finally, an investigation into the spiritual aspects. The reader will learn that synesthesia has been acknowledged since the early Greeks spoke of it, and was in vogue in the 1700 and 1800s, but fell out of favor when psychiatrists began emphasizing behaviorism over inner experience. But in the 1980s, researchers began noticing that synesthetes’ brains were different and this led to a resurgence of study.

The author discusses numerous scientific reports and how they advanced or hindered the understanding of synesthesia. As a trained journalist, she is careful to back up her comments with references to specific studies or papers (there is also a five page list of resources at the back of the book). This, combined with her personal quest to understand the spirituality of synesthesia makes up much of the book, particularly the later half. Synesthetes, she argues, are more creative and may be able to attain a level of spirituality and enlightenment that others only dream about. And, she notes, “I believe it is fair to say we are gifted in seeing and feeling the things that we do.” (pg. 265) This portion goes well beyond discussion of heightened senses into topics such as the realms of quantum consciousness and the connection between synesthesia and “the divine.”

Chapters in Tasting the Universe cover the full spectrum of how synesthesia affects people, the unique ways it is interpreted and how it has enhanced their lives. Mixing this with the spiritual journey is at times a problem as the flow of the book is a bit disjointed. Nonetheless, it is a good introduction to the world of synesthesia.

Quill says: An intriguing look into the world of synesthesia that is well worth reading for anybody interested in learning what it is like to taste words and see sounds.