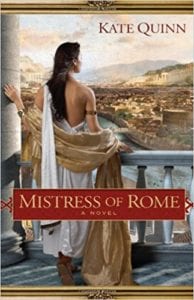 The place is ancient Rome, the time AD 81. The characters, from a slave girl to the emperor of the entire Roman world, are richly portrayed. Prepare to enter a beautifully recreated world full of the wonders and cruelty that was ancient Rome.

Thea is a young Jewish slave, purchased for Lady Lepida Polia, a spoiled rotten, obnoxious fourteen-year-old Roman. The girls are the same age, but miles apart in status. Both are beautiful, but Thea is destined to win the hearts of men with her lovely voice while Lepida wins them by deception.

Thea must accompany her mistress to the games at the Coliseum and while there, a new gladiator, Arius the Barbarian, catches both girls’ eyes. Lepida tries to lure Arius with her snake-like charms, but the gladiator is only interested in Thea. Incensed, Lepida sells Thea to a whorehouse to separate the lovebirds.

While Arius continues his regimen of violence in the coliseum, Lepida is married to a senator whom she doesn’t love. She goes along with the wedding in the hopes that her new status will bring her closer to the emperor and all that his connections might bring. Meanwhile, Thea’s exquisite singing voice has brought her to the attention of many of Rome’s finest houses, including that of the Emperor. Much to Lepida’s disgust, Thea is made Emperor Domitian’s mistress.

When I first received this almost 500-page historical fiction novel, I admit I was a bit hesitant. I feared the book would be bogged down with historical facts, and present a dull, dry story surrounding the rule of Emperor Titus Flavius Domitianus, a.k.a Domitian. Not so. I’m happy to report that the Mistress of Rome is a rich, spicy, enthralling story that grabbed me almost immediately. There was just enough historical background provided to set the proper scene, yet not distract the reader from the plot. There was, however, plenty of romance, betrayal, and family intrigue.

It should be noted that the story is told in the first person as well as third person narrative. The first person sections are told by both Thea and Lepida and this jumping around did take a bit of getting used to. However, once the story got going, it was fun to see how Lepida interpreted an event versus Thea.

Quill says: For a taste of Roman beauty and brutality, richly seasoned with just the right amount of romance, pick up a copy of Mistress of Rome.

For more information on Mistress of Rome, please visit the author's website at: www.KateQuinnAuthor.com