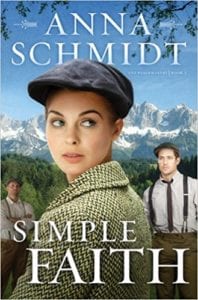 As Simple Faith begins, three prisoners, Lisbeth, Josef and Anja, have just escaped from a Nazi concentration camp and found their way to Anja’s home in Denmark. The three are trying to keep one step ahead of the Nazis and are leaving Denmark to live in Belgium. They are Quakers by faith and are getting involved in the Underground Resistance. The Underground, of course, is helping Allied pilots who have been shot down in enemy territory to escape into Spain and find their units in England.

Their work becomes very personal when American pilot, Peter Trent, parachutes into their lives. When Peter comes on the scene, he is a wounded pilot who finds himself in the midst of these brave people. Peter parachutes onto a field near Anja’s grandfather’s farm and they begin to plan how to return him to his unit. The pilot will have to travel across most of the Western part of Europe with his protectors and, of course, the Gestapo is a couple of steps behind and coming up fast. However, there is a problem. Anna is starting to look at Peter in a new way and she knows that loving this brave soldier could be life-threatening to both of them.

For readers who have read Book One in the series, All God’s Children, this story will be easy to fall into. For those who have not read the first book, I'd recommend picking up a copy and starting from the beginning. The author has done very accurate research and, with that said, Simple Faith, is truly well researched as to times and events. The story tells about the resistance, who were some of the many heroes of WWII, who often died in the line of duty and no one ever knew of their bravery. Many people do not recognize the plight of these wonderful civilians who risked their own lives and the lives of their families to help the allies as they were living in Nazi occupied countries and didn’t know from one moment to the next if they would be alive the next day. It is nice to see them remembered in this historical novel.

Quill says: Perhaps this series of books will remind historians just how brave the men and women on the sidelines were.