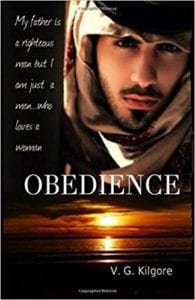 The story of Noah, the Ark, and the flood is one that many people know well, but little is said about what happened in the time after the flood. After all, life had to find a way to continue after the rains had stopped and author V.G. Kilgore gives us a glimpse into what transpired when the Ark finally hit land again.

Noah’s youngest son Ham has never been the most obedient child, but he has always been a hard worker and became a huge help to his father. However, when Ham fell in love with Lita, the daughter of a fisherman, his whole outlook on the world changed. Suddenly, she was all he could think about and he would go down to the shores to buy fish from her father just to catch a glimpse of her. With feelings this strong, Ham could not help but think that this type of passion could only come from God. Unfortunately, Noah did not share Ham's view on the romance, and wanted Ham to marry someone of Noah's choosing, and a woman who held a higher rank in the community. Knowing that his feelings for Lita would not let him be happy with another woman, Ham told his father that if he did not give his blessing for their marriage he would leave, and Noah would then lose his hardworking son. With a grumble Noah agrees and allows Ham and Lita to marry.

After their marriage, Ham and Lita were extremely happy. A very loving couple, they had seven children together.

When Noah tells his family of God’s command to build an Ark, Ham begins to question his father's sanity, for why would God ask a farmer to build a boat? Even though he is not sure, Ham does what he is asked and helps to build this boat and is surprised when pairs of all the animals come forward to board, just as his father said they would. As Ham and his wife cling to each other when the flood waters come, they both grieve over the people who are lost and hope that wherever this journey is taking them, it will bring a better life. Over the course of the forty days they are aboard the Ark, Lita finds out she is pregnant and the pair are elated that their child will be the first born in the new world. When the rains stop and the Ark hits land, everyone on board is ready to start their new lives and establish rules and traditions for a new future. Unfortunately, tragedy strikes both Ham and Lita, leaving them wondering if this life is really any better than the one they left behind; the one that was devoured in water.

This book was quite fun and intriguing to read. When I first read the book's summary, I was worried the writing would be too structured - much like a history book instead of a novel. Fortunately, author V.G. Kilgore writes in such a way that it was just like reading a good dramatic story. Each of the characters were developed fully, as their unique personalities were shown allowing the reader to relate to each one. This is not a book that is simply restating a famous story, but one that dives deeper into the emotions, the fears, and the joys that each character would have felt and that made for a great story.

Quill says: This was a wonderful book, giving the reader a great addition to a well-known story.