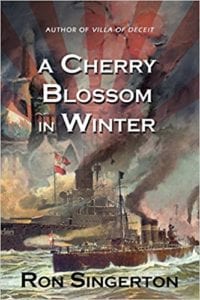 There are many tales when it comes to war; some memorable, some a regurgitation of information that has come before. Chances are, with all the titles you have read over time, there are only a sparse number you’ve liked so much that they reached the hallowed bookshelves—finding their niche among those other few that were so good you read them again and again. This is one of those books.

Told with a passion that speaks as if the writer was actually a character in this time period, readers are introduced to Alexei. He is competing in St. Petersburg, Russia, at the Invitational Fencing Competition. It is 1897, and Alexei has already eliminated some of the best there, and is now competing against a man who is older than he but is also the one responsible for teaching him this skill. Alexei is seventeen years of age, which makes him one year shy of being able to attend the prestigious Naval Academy where this competition is taking place. Upside is, that the superintendent of the Academy, Admiral Kochenkov, knows Alexei’s ambassador father and can perhaps get him enrolled a tad bit sooner.

Following in the footsteps of his father, Alexei sees his future as a military one, full of heroic scenes and a wealth of honor that is well-earned. There is a huge part of him that wants to make his father proud, although good old Dad is not exactly the nicest of all men. Life, of course, is never an easy one, especially during an age where war is constantly being spoken about and two cultures are scrambling to be the first to fall into the future “super-power” category.

There is a great deal of anguish at home for Alexei, in his beloved Russia. However, Alexei finds an even greater wall to climb in the country of Japan. When he travels with his father (who hates all things Japanese) to this rich and vibrant country, he meets the girl of his dreams, beginning a journey where love will be his greatest test of courage. Her name is Kimi-san and she has the distinction of being the daughter of a Japanese war hero. She and Alexei find themselves falling head over heels with one another, even though the threats are more than real when it comes to these two particular nations joining together.

As the talk of war grows, Alexei returns to his homeland in order to become the naval officer he has always dreamed of being. What Alexei is not ready for is the family secret that could destroy him, an angry comrade who becomes a rival, as well as a best friend who leans toward revolution, joining with Marxist rebels who want nothing more than to overthrow the regime.

Alexei will find himself fighting for a country that is basically exhausted, attempting to stand up against his true love’s homeland that is far more eager, young, and much more modern when it comes to its weaponry. The end result will be a battle of monumental proportions, and two hearts that will work diligently to find a way to be together even if the world around them is falling apart.

Everything focused on in this book is done with such exhilaration that all of the romances – and, yes, there are more than just Alexei and Kimi-san – as well as the family battles, the battles on land, at sea, and in the minds of these young people who are hoping to be seen as the honorable ones when the smoke clears, are vibrant and emotional to the nth degree.

Quill says: This historical wizard has once again penned a tale that speaks to readers on every level, inspiring both the heart and mind.

For more information on A Cherry Blossom in Winter, please visit the author's website at: ronsingerton.com