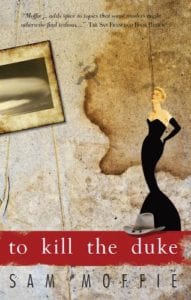 Laugh in the faces of Communist oppression and nuclear warfare in this irreverent historical novel where neither golden Hollywood icons nor brutal totalitarian dictators are immune to mockery. To Kill the Duke tells the story of an outrageous murder plot gone awry. As the story begins, comrade Ivan Viznapu works in a Soviet government office as a lowly mailman. When offered a job as a movie projectionist at a party for “Uncle Joe” Stalin, he jumps at the chance of a promotion despite the risk of execution should things go wrong. Although he is well-briefed by the man for whom he is filling in, his first night as a projectionist is more bizarre than he could ever have been prepared for. After befriending security guard Alexei Aleksandra and chef Boris Gila and witnessing the strange proclivities of the Soviet big shots, Ivan and his new friends find themselves dealing with the aftermath of Stalin’s sudden death in his private screening chamber. When the terrifying secret police chief Mr. Zavert comes to investigate the death, he enlists the three men to head a mission designed to destroy the morale of Americans and put the Soviets ahead in the Cold War: assassinate John Wayne.

While Ivan and Alexi head to Hollywood to set up a movie production company that serves as a front for their mission, movie producer Dick Powell is busy trying to arrange the filming of The Conqueror, a movie about Genghis Khan starring John Wayne himself. Funded by eccentric billionaire Howard Hughes, the movie is set to be filmed in the red deserts of Utah on land which the government has leased to him for one dollar. After lining up the actors, extras, and suppliers, Dick begins filming the movie but faces difficulties as frequent windstorms blow red sand into the works. Hughes eventually discovers the reason why the land was leased so cheaply, and realizes that it’s not only sand being carried in on the fierce desert winds. Boris, Alexei, and Ivan find that their mission may be obsolete, as the American government is already doing their job for them through a horrifying experiment conducted on its own citizens.

To Kill the Duke is an unusual historical novel that brings 1950s Hollywood and Soviet Russia to life, as well as shedding light on the atrocities committed by the Soviet and American governments during the Cold War. Moffie shows no sympathy for the powers that be as he turns fascism into farce and democracy into duplicity in this political satire. The cast of classic movie stars add glamour to the story and the intricacies of movie production are worked fluidly into the plot. Howard Hughes is a fascinating character with his many quirks, and Dick Powell is immensely likeable as the lone man of integrity in the superficial and immoral world of Hollywood. The Russian characters offer comic relief with their peculiar expressions and love of puns, and the plot takes many unexpected twists as the story unfolds and the real villains are revealed. Despite some punctuation and spelling errors, the novel is very readable, and although it comes off as a bit odd altogether, its uniqueness certainly makes it stand out from the average historical novel.

Quill Says: With an offbeat sense of humor and a star-studded cast, To Kill the Duke offers a fresh and twisted take on the Cold War and the Golden Age of Hollywood.

To learn more about To Kill the Duke, please visit the book's website at: www.tokilltheduke.com