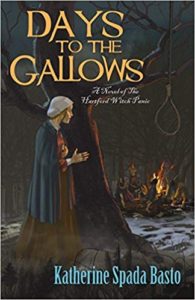 Katherine Spada Basto shines a light on a chilling portion of Connecticut’s history in Days to the Gallows.

Life in Connecticut Colony takes a turn for the worse while Governor Winthrop is away over the course of a year, negotiating a charter with the King of England. In his stead are Captain John Mason and Marshal Gilbert. The latter controls the colony with an iron fist, warning the town folk that punishment is imminent if they veer away from righteousness.

Two friends, Hester Hosmer and Ann Cole, sneak out one night to investigate the pagan goings-on in the South Wood. They look on warily, knowing full well that the traditions of England—the very things that Marshal Gilbert talks about—go against Puritan religion. While the event is unnerving to the two older teens, strange happenings occur after they witness the mysterious death of eight-year-old Betty Kelly.

Ann is particularly troubled by the little girl’s untimely death and seeks revenge by pinpointing various town folk. She also feels that these same people are the reason she is unable to find a husband. Jealousy arises when she learns that Hester has a suitor, a peddler by the name of Tom Flagg.

Hester begins to distance herself from Ann when her histrionic displays during church meetings reveal witchery among specific individuals. Mary Sanford’s quiet hanging on Gallows Hill is the first of many to come. When Hester speaks out in defense of one of her neighbors accused of witchery, Ann begins to target her. Now fearful for her life, Hester has no idea how she will be able to escape the gallows.

First-time author Katherine Spada Basto draws readers into an ugly time of American Colonialism: the Hartford Witch Panic of 1662. A well-balanced mix of fiction with fact brings this turbulent event to life. Unique to Basto’s narrative is the cast, which mainly consists of historical figures. Only a handful of characters are fictional, such as Tom Flagg and his father. In the case of Hester and Ann, they were indeed friends and lived across the street from one another.

Other features make this tale engaging as well. At the forefront is Hester’s narration set in Elizabethan speech, which offers authentication to the story. The first-person presentation, as told through Hester’s perspective, is a perfect vehicle for Basto to provide readers with a glimpse of how a spark of revenge can turn everything dark. Indeed, Ann’s choice to go down that road not only costs her Hester’s friendship but also the lives of innocent people. Irony quickly steps into play as both static characters, Hester and Ann, head in opposite directions: Hester (the protagonist) becomes emboldened to do what is right while Ann (the antagonist) chooses to buy into the self-subscribed form of “righteousness” of the Puritan leaders.

Kudos to Basto for a stellar job recreating a horrific period in American Colonial history. Well-written and researched, Days to the Gallows is a riveting and chilling story from beginning to end.

Quill says: Days to the Gallows is nothing less than a must-add book for American Colonial history buffs.

For more information on Days to the Gallows, please visit the author's website at: www.katherinespadabasto.com