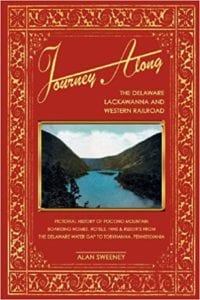 The cities were hot and the Pocono Mountains began beckoning the city folk to come to their doorsteps, cool off, have a bit of lemonade and perhaps take a dip in a lake or even take in some fine dining. At the turn of the 19th century the boarding homes, hotels, inns, resorts, farmhouses and cottages threw out their welcome mats “for people who needed to escape the cities.” For the economically depressed Pocono places of lodging and for the city folks anxious for a vacation it was a win-win situation. All aboard! The Delaware, Lackawanna & Western Railroad was more than happy to accommodate the hordes!

The reader’s journey begins at the Delaware Water Gap, often noted as “The Gateway to the Poconos.” There were eight stops along the Lackawanna route and where one chose to stop would only be conjecture. Perhaps it was an advertisement, word of mouth or even the appeal of a postcard received from a friend. The remaining stops were East Stroudsberg, Analomink (Spragueville), Henryville (Oakland), Mount Pocono, Pocono Summit and Tobyhanna (Naglesville, Tobyhanna Mills). In the last of the 1800s people began to flock to the area in droves and the tourist industry began to flourish. Another little known industry prior to 1898 began to flourish as well. It was the postcard.

The accommodations scattered along these routes were viewed and photographed through the now unknown eyes of a postcard photographer. The astonishing postcard compilation in this book documents the social history of the times via the Golden Age of Postcards to the present day Photochrome. There is a smattering of photographs courtesy of local historical societies, newspaper advertisements and assorted ephemera. Each is accompanied by a short vignette of known information, or in some cases, some very telling and sorry societal prejudice. For example, the Van Horn Inn at Shawnee, advertised “fresh vegetables, excellent spring water in every room and Gentiles only.” Most places did not say, but the implication was quite clear . . .

Some were not welcome, but those who were arriving at the stations were carried at first by “horse drawn carriages” and later by automobile. The Montanesca checked references “for all new vacationers.” The Spruce Cabin Inn in Canadensis was the first “to serve liquor,” and The Farm on the Hill was the first inn that “welcomed honeymoon couples.” Unfortunately many of these places were destroyed by fire, demolished to make way for modern day buildings or converted to private homes or apartments. The memories of many of these places now lie in the mind’s eye of the few who remember them and in books and postcards. As the author so aptly states, “Now Mount Pocono is more a place to live than to play.”

This is an astounding compilation of postal history of a bygone era. This book fills many gaps in the history of the hotel industry as well as that of the railroad industry as both were dependent upon the other. Some of these cards, most likely the linens, were slightly grainy as they are notoriously difficult to reproduce. All have been reproduced in black and white as color would have been financially prohibitive. In the back of the book are additional vignettes, a listing of all the establishments in the book, a bibliography and additional recommended resources.

Quill says: Pick a dream . . . this book will provide them for days on end!