The Price of Blood: The Emma of Normandy Trilogy Book 2 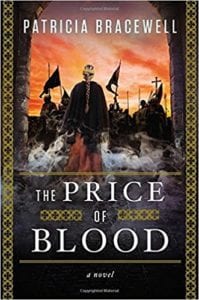 The Price of Blood: The Emma of Normandy Trilogy Book 2

The Price of Blood is the second volume of a trilogy featuring Emma of Normandy, who comes to England in 1002 as the 15-year-old bride of King Aethelred II of England. Hers is a loveless marriage but she makes the best of it by being a good Queen to her subjects. She also falls in love with Athelstan, her husband’s son.

The first book in the series, Shadow On The Crown, was based on the Anglo-Saxon stories and is full of violence, power and intrigue. Emma has an interesting life as Queen while her husband is not all together sure she can be trusted. Emma soon finds she must defend herself against all enemies and, in order to secure her crown, she has a son for her King.

The Price of Blood picks up in the year 1006, as Emma is making alliances with the court and is a good Queen to the English people. There is a Viking invasion on the horizon that threatens the peace. At the same time, she is fighting the loving feelings that she has for her stepson. Her husband, King Aethelred is a very mistrusting soul. He really doesn’t trust his councilors, his relatives or his Queen and crazy though it sounds he is very scared of the ghost of his dead brother. Emma watches over her husband although she fears for her children and the English people. She is bound and determined to survive so her son will claim the crown. King Aethelred’s son, Athelstan, is still in love with Emma and is very close to the crown and is content to wait until his father’s demise. When the Vikings attack, it soon becomes apparent that father and son do not get along at all. Queen Emma is trying not to play favorites and does her duty to be by her husband’s side and risks her crown and her life to bring her son to the throne.

Using the wonderful research done by the author, this book never gets dull as the Court drama and history will keep readers going for hours. With all that history and family drama, I would suggest that you start with the first book in the series, Shadow On The Crown. This second book continues the fascinating story of a Queen who is not really remembered and her role in helping her husband against the ever rising Vikings during the Middle Ages. As she struggles to survive for her son, Emma is very protective of those who she cares for most. The reader, too, will come to care about Emma and her struggles.

Quill says: A story that will bring across a strong woman who, as was typical of her time, wasn’t consulted on anything. But while the men fight and scheme, Emma’s wisdom helped keep the kingdom together. This story kept me glued to the pages until the very end.