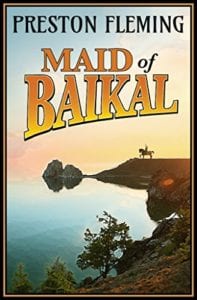 Beginning with a flashback to war in the Philippines, we meet First Lieutenant Edmund “Ned” du Pont, a leader in the U.S. Army. Haunted by his nightmares, Ned is also eager to fight again. After going to visit Colonel Charles Holt, they strike up a deal where Ned can return to war, but not exactly as he planned. Holt wishes to send him to Siberia, not to fight, but to aid in correspondence and intelligence as an undercover worker in the Russian Railway service corps as an American Railway Man and telegraph and wireless expert. While this task seems far from simple in the beginning, the truth is he’s about to be in over his head in a completely different mission involving a young Russian woman that could completely change the tides of the Russian Revolution.

Upon arrival in Irkutsk, Ned is to meet Staff Captain Igor Ivanovich Ivashov, his Russian liaison officer. After exchanging information and learning a very small amount about each other, they board a train heading to Omsk. Prior to arriving at their destination, however, they stop at Verkhne-Udinsk, where they will join Stepan Petrovich Dorokhin and his guests for dinner. It is at this dinner that Ned first meets Zhanna, Stepan’s daughter. Zhanna is a headstrong girl of eighteen, and Ned is instantly attracted to her, although he is unsure of exactly why. At the end of the evening, Zhanna gives a slip of paper to Ned with a message to meet her the following morning. The next morning, Ned meets with her and Zhanna reveals that she has been hearing voices of saints. The voices, she explains to Ned, have been calling her to go to Omsk to deliver a message to Siberian dictator Admiral Kolchak. That message could change the course of the war, and she wants Ned to take her there to introduce her to the Admiral. Ned refuses and later finds out she also asked Ivashov. Zhanna's voices, however, tell her they will soon meet again and her mission will be fulfilled. Later, her voices call her to serve in the Serbian Army and lead troops as the Maid of Baikal, but does she get more than she bargained for? How much can her faith and beloved voices protect her?

The Maid of Baikal was by far one of the most well planned and engrossing books I may have ever read. I was impressed from the very beginning thanks to a list of characters, carefully chosen musical themes, historical photographs and maps. There was not one time in this book that I was confused, not only thanks to the tools given in the beginning, but because each character and place was so well-written into the story. The Maid of Baikal provides a deep history in an entertaining and easy-to-understand way while allowing you to become connected to the characters and their stories. I thoroughly enjoyed reading this book and was drawn in almost instantly. Anyone who loves history or a well-written story will love Maid of Baikal.

Quill says: The Maid of Baikal is an intriguing tale of war, miracles and the power of faith that is sure to engross history lovers.

For more information on The Maid of Baikal: A Novel of the Russian Civil War, please visit the author's website at: www.prestonfleming.com