Dogs of War: The Stories of FDR’s Fala, Patton’s Willie, and Ike’s Telek 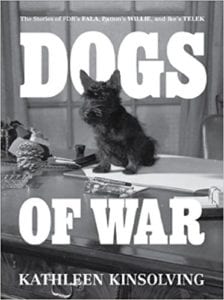 Dogs of War: The Stories of FDR's Fala, Patton's Willie, and Ike's Telek

This book is a treasure of captivating stories of three dogs that took their places in American history alongside their owners, three men who everyone will recognize. First on the list is Fala, a delightful Scottish Terrier who was beloved by President Franklin D. Roosevelt. This little dog was the first “First Dog” in the country and the nation loved him. Next, a Bull Terrier called Willie owned by General George S. Patton, who was Patton’s favorite companion during the Second World War. Last, but certainly not least, was Telek, another Scottish Terrier, owned by General Dwight D. Eisenhower. These stories of man’s best friend are a great honor coming out close to the anniversary of the attack on Pearl Harbor. It's clear that dog owners, as well as all animal lovers, will appreciate the way these pets captured the hearts of all who came in contact with them.

As FDR and his two top Generals waged war against the enemy, they relied on their pets to help handle the enormous stress of planning and executing battle plans. The author, Kathleen Kinsolving, wrote that “Studies have found that dogs can reduce stress, high blood pressure and anxiety and that’s what inspired me to write this book to show how important the human-animal bond truly is.”

This was a fairly short book but I would like to tell some anecdotes concerning these special friends. Fala, FDR’s dog, was a gift from his cousin in 1940. The war was heating up before the American’s got into it in 1941 and the President’s cousin thought that he could use some companionship. Very soon the Terrier and FDR were inseparable as Fala attended press conferences and was present at the evening cocktail hour. The dog had his own pen outside the Oval Office, learned to shake hands and stand at attention on his hind legs during the playing of the National Anthem. He was a favorite of the press and the public and was a member of "Barker's for Britain" a group of dog lovers who were influential in helping bombing victims in England. When FDR passed away in 1945, Fala went to live with Eleanor Roosevelt in Hyde Park, NY. He lived until 1952 and is buried at the foot of FDR's grave. Fala is also recognized at the FDR memorial in Washington, DC.

General Patton's Willie was by his side through many battles that the General bravely fought but when the war was almost over and the General and Willie were about to be transferred back to the US, the General left on a hunting trip with some colleagues and did not take Willie. Willie was NOT a hunting dog and was not interested. The car was in a horrific accident which paralyzed the General and he did not recover. Willie spent the rest of his days with Beatrice Patton, the General's wife, and lived to the ripe old age of 13 years. The most poignant picture in this book is one of Willie lying next to the General's footlocker and waiting to see his lifelong friend again.

General Eisenhower's Telek was a real comedian who left puddles all over in the worst places but the General loved him dearly. After the success at D-Day and the signing of the surrender in the war in Europe things changed for Telek. Telek was given to Kay Somersby, who had been Eisenhower's driver in Europe. After Eisenhower returned to the States, Telek only saw him sporadically and stayed with Kay until his death at age 17 years. Also, he was always known as the "second most famous Scottish Terrier in the world."

There is one last story in this book of a fighting dog named Cairo, a Belgian Malinois, who was with SEAL Team 6 when they took down Osama Bin Laden. There is also a lovely picture of this beautiful animal.

Quill Says: These stories of Fala, Willie and Telek will take the reader on some wonderful trips as they were among the most famous dogs in American history. These extremely incredible animals will touch your heart in a very special way.