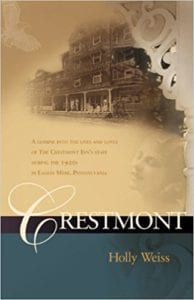 Have you ever wished for a comfy, old-fashioned inn where the staff attends to your every need, there’s a nearby lake where eagles soar, and each night there’s a fabulous home cooked meal waiting for you? That special place is within the pages of Crestmont, the debut novel of Holly Weiss.

Crestmont takes place primarily in the 1920s and is the story of Gracie Antes, a young woman who, realizing she has feelings for her sister’s fiancé, decides to leave town and find her fortune. Gracie applies for a job at the Crestmont Inn, a “lakeside mountaintop inn,” hoping to be hired as a waitress. Unfortunately, Gracie has no waitressing experience and so is offered a job as part of the cleaning staff.

Gracie quickly settles into working life at the Crestmont Inn, trying her best to fit in with the other employees. Along with Gracie, the reader is introduced to a myriad of inn staff, from PT the easy going “driver, bowling alley attendant and gofer…” to Bessie, a rather difficult, temperamental member of the cleaning staff. Upon first meeting Gracie, Bessie boasts, “Listen, girlie, don’t think just because you’re new Mrs. W’ll cut you any slack…she expects perfection from all of us; it’s just that those of us who are experienced know how to deliver.” It’s apparent that Gracie is going to have some problems dealing with Bessie.

Fortunately, the inn’s owners, William and Margaret Woods, along with their daughters Peg and Eleanor, are much more welcoming than Bessie. Indeed, it isn’t long before Gracie becomes one of Margaret’s confidants, as well as keeper of secrets for the children.

As Gracie’s abilities and strong work ethic are proven, she is offered an additional job on her day off. The job requires taking care of an older woman, Mrs. Cunningham. The elderly woman’s daughter, Madeleine is quite happy to have one day a week to escape her caretaker responsibilities. As Mrs. Cunningham and Gracie grow closer, Madeleine and her mother drift apart.

Crestmont is not just the story of Gracie’s life at the inn. It is a study of relationships, some growing stronger over time, others growing more distant. Gracie is treated more like family than an employee by the Woods, while at the same time Gracie loses touch with her parents and sister. She has, in essence, traded one family for another. I was wondering if Gracie would find romance with one of the other employees or townspeople in Eagles Mere, PA, home to the Crestmont Inn. There was a hint of interest with PT, as well as Otto and Eric, two young men who came and went from Gracie’s life (might one return?). But this is not a book about romance, it’s a story of intersecting lives.

In the Author’s Note, author Weiss acknowledges that she was inspired to write this book after staying at the real Crestmont Inn in 2006. Many of the characters are based on real people, although their “…characterizations…are wholly the author’s creation.” With extensive attention to detail, the author describes real buildings, rooms and even furniture. For example, Gracie buys a yellow jewelry box before her arrival at the Inn in 1925, a jewelry box that is still at the Inn.

The author creates a beautifully realistic world of the hustle and bustle at a busy inn in the 1920s. While there is perhaps a bit too much coverage of the more mundane chores (Mrs. Woods quizzing the new cleaning staff to see who could figure out the one thing she forgot to do when cleaning a room), there is plenty within the pages of Crestmont to keep the reader turning the pages. Indeed, by the end of the book, Gracie, Mrs. Woods, Mrs. Cunningham, PT and the others are like family members and the reader will want to see what happens to each.

Quill says: Reading Crestmont is like staying at a quaint old inn, curling up next to the fireplace with a cup of hot chocolate and an old friend and catching up on the day’s events.

For more information on Crestmont, please visit the author's website at: HollyWeiss.com