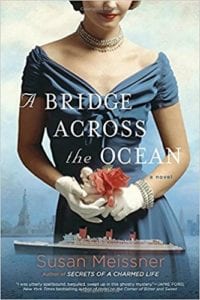 Brette Caslake was one of the females in her family to be given "The Sight." A gift that is only given to the women in the family, at random, The Sight is something that Brette tries her very best to ignore. This gift allows Brette to see drifters in the thin places between Earth and their afterlife, as a result of not being able to make it to the other side because of the fear of letting go. As the only living member of her family to have this gift, Brette has always felt alone and let very few people know of her ability, thanks to various mishaps in high school and college. Even her husband knows only the basics of her ability. It is only when the subject of children comes up that she freezes, as she could potentially pass on her gift to her daughter. With a promise to talk about what made her mother decide to have children while knowing the risks it could pose, he sets off on a business trip. Soon after, an old high school friend in need seeks her out for help for his daughter and leads her to answers she has always needed.

Simone Deveraux, the daughter of a shoe shiner, fell witness to her father and her brother’s murder as a result of being part of the Resistance during WWII. Upon a previous request from her father, she flees. In an effort to make sure no one sees her escape to the address her father had given her, Simone enters an old abandoned shop, where an awful event threatens to change the course of her life. She soon makes it to the address her father provided, where she is then taken to a winery in southern France, where she resides, and falls in love with an unlikely companion.

Annaliese Lange, a German ballerina, was also no stranger to wartime strife. After being forced to marry an abusive Nazi soldier who kept her cooped up in their apartment, she escapes to be with her childhood friend, Katrine. Annaliese lives with Katrine and has plans to move with her to America after Katrine marries an American. Things do not exactly work out the way that they are planned and these events leave Annaelise with a choice, what is right and what is wrong? What actions can be forgiven and what can not? Soon, these women are aboard the Queen Mary, a ship transporting war brides to America, to reunite with their husbands and begin their lives anew. But is one of them living a lie? Or are both of them? What actions are to be forgiven during a time of fear and war?

Even from the very beginning, I was hooked on A Bridge Across the Ocean. It is simple to get pulled deeply into the stories of Annaliese and Simone, as their pasts are haunting and filled with twists and turns that make you wonder what you would do in their situations. Brette and her Sight not only tie the stories together perfectly, but provide some extremely relatable thoughts and feelings. The different settings and times were separated perfectly and this ensured that the story did not become confusing to the reader. It was easy to differentiate the stories of the characters even when the story had just begun. As books like this are easily confusing at first, I was impressed that there was never a part of the book where I had to question what was going on.

Quill says: A Bridge Across the Ocean is the perfect historical fiction read for those who want to be thrown into a different place and time and challenged to put themselves in the characters' positions.