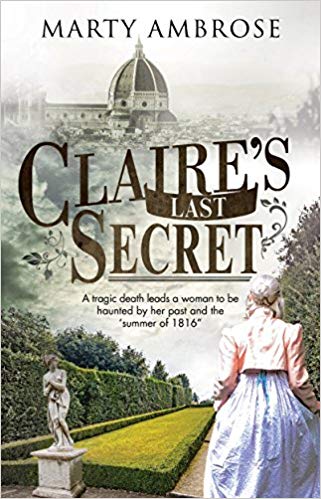 Claire's Last Secret is an historical mystery that features English writers. In the summer of 1816, a literary circle gathered in Geneva, Switzerland. It included Percy Pysshe Shelley and George Gordon, Lord Byron, as well as Mary Shelly and John Polidori. This is the summer that Mary Shelley had written Frankenstein and John Polidori had written The Vampire. The story is told by Mary's stepsister, Claire Clairmont, who was another member of their circle.

Each chapter in this story moves back and forth between the same two time periods and locations. The first one begins in 1873 in Florence, Italy, where Claire is living in genteel poverty with her niece and her niece's daughter. The other time period in this novel is 1816, a time when Claire had already been one of Byron's lovers in England and was now carrying his child. Claire named their daughter Allegra and had been told this child had died when she was five years old, but Claire had never been sure if Allegra had really died at that time.

In 1873, Claire receives a letter from her old friend, Edward Trelawny, who advised her to expect a visit from William Michael Rossetti. He was interested in purchasing some of her most cherished possessions, such as letters from Shelly, Mary, and Byron. By the time Claire discovers that Rossetti was one of Polidori's nephews (Polidori was Byron's personal doctor and a man Claire regarded as her enemy), she had already begun searching her memories for what had actually happened back in 1816. When she began dickering with Rossetti, her personal priest and confessor was suddenly murdered.

Claire is a fascinating character and lived in an age when her independence was not accepted or valued. The one love of her life had been Bryon, but the one who now supported her in Italy was Shelley. The author has obviously researched not only Claire's life, but all that happened in that one eventful summer in 1816. The narrative is supported by a short note at the end of each chapter written by a contemporary observer.

Quill says: A well-written book which will be enjoyed by Shelley and Bryon fans, as well as those who like historical mysteries.