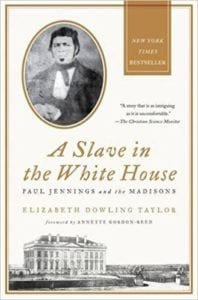 In the year 1865, a small book entitled A Colored Man’s Reminiscences of James Madison was published. It was written by Paul Jennings, who was born on James Madison’s plantation, in Montpelier, Virginia, in the year 1799. As you might have guessed he was the son of slaves. But, at his death, he was a free man with a family. This is Paul Jennings story written by Elizabeth Dowling Taylor.

Paul was born on James Madison’s family plantation in Virginia to a mother of African and Indian ancestors and his father, an Englishman. Most of the time, mixed-race slaves were house servants: ladies’ maids, gentleman’s valets and minders for the children. Some thought this was a privileged life compared to the field servants but, not always. House servants were always under the thumb of the master and mistress and had to wait on them hand and foot and travel with them whether they wanted to go or not.

When James Madison entered the political arena, Paul’s life changed drastically. In Washington, Paul saw free black people and hoped that one day he would also be free. His attitude changed as James Madison’s servant and he saw some of the most influential men in the country who came to the White House after Madison became President and, of course, Dolley Madison’s parties. This was Paul Jennings’ life in his early years.

When the Madisons left the White House, Paul became the ex-president’s valet at Montpelier. This put him in contact with the family every day taking care of the needs of the fourth President of the United States. It also provided him with the means to write a White House memoir which became a history of slavery and the early years of the United States. There were free black men in Washington at that time but, it is a shocking contrast that George Washington, Thomas Jefferson and James Madison, three of the Founding Fathers, were slave owners. As the Author’s notes describe: These slaves were lorded over by the general who won the War for Independence, the author of the Declaration of Independence, and the architect of the Constitution and Bill of Rights, respectively. They all owned slaves and their plantations were run as all others in the South.

This was the life of Paul Jennings and the Madison family. Paul was present when the former President died in 1836. In the year 1847, he bought his freedom from Dolley Madison for $120.00 (a huge amount of money in those days). The money was loaned to him by Senator Daniel Webster. Following this transaction Paul worked for Webster to repay him for the cost of his freedom. There are many tales in this fabulous story including the saving of the portrait of George Washington by Gilbert Stuart that hung in the White House and was in danger during the War of 1812 as the British Army torched the White House. It was said that Paul helped Dolley Madison save the portrait but, in his memoirs, Paul states that he and a French cook saved the picture.

Quill Says: Even if you are not a lover of biographies and/or memoirs, please pick this one up. The author did an amazing job in researching this book with the help of Jennings' descendents. It’s a keeper.

Article first published as Book Review: A Slave in the White House: Paul Jennings and the Madisons by Elizabeth Dowling Taylor on Blogcritics.