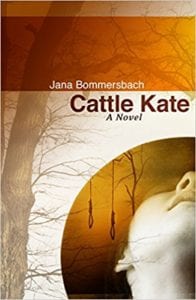 There are countless tales and stories pertaining to the settling of the American West that bring to life the exciting adventures of chasing outlaws and bringing them to justice. One such tale was of 'Cattle Kate.' In newspapers the tale of Cattle Kate was one that presented her as a notoriously terrible woman who rustled cattle from the neighboring ranches but the true story was all together different. In this novel, Cattle Kate by Jana Bommersbach, a completely different view is told and unfortunately in this story there is no sign of justice.

The girl who was known after her death as Cattle Kate was born Ellen Watson in Canada and was the first born in a long line of children for the Watson family. For many years Ellen’s mother and father debated about moving into Kansas where the United States government was offering homesteads to families if they lived on the land for five years and made improvements during that time. Ellen’s father was for the idea but her mother continued to believe that Kansas was no place to raise a family as she had heard about the threat of Indians and the uncivilized behavior that ran rampant. However, the decision was finally made to move to Kansas and Ellen could not have been more excited to start this new journey with her family. While in Kansas Ellen married a man named William Pickell and thought all was well until he became abusive. It did not take long before Ellen knew she could not stay with this man. She left him behind and decided that she would start over by changing her name to Ella and moving to Wyoming.

In Wyoming Ella had the dream to own her own homestead and her own cows but she quickly learned that being a woman made that extremely difficult. One man, who was particularly difficult was a prominent rancher in the area named A.J. Bothwell. He consistently harassed Ella, trying to run her off her land in any way he could. However, Ella was determined to stay for she had earned this homestead honestly and she was not about to let some power hungry rancher take it away from her. Unfortunately she did not realize how far one man will go to get what he wants especially a terrible man like A.J. Bothwell.

As soon as I heard the title of this book I wanted to read it because I knew that it would be related to cattle and ranching and both of those things are something I hold dear. Throughout this book I was easily able to relate to Ellen/Ella Watson as that independent, determined spirit - something I greatly respect. I enjoyed every bit of this story as Jana Bommersbach brought to life not only the history but the emotion of Ella as she tried to make it in an untamed land. In addition, the historical facts at the end of the novel were great as they helped to tie everything together.

Quill says: A wonderfully written story that uncovers a dark tale of the American West.