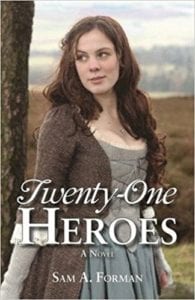 This new book by Sam A. Forman will definitely stand with his others that focus on the Revolutionary War. Twenty-One Heroes will really bring to the reader the days and nights of the war starting with George Washington's famous crossing of the Delaware River in Pennsylvania on Christmas Day in 1776. At the place where Washington crossed the Delaware there are twenty-one anonymous graves of Continental soldiers, a remembrance of the soldiers who died there. You can find this site today by going to the 'Washington Crossing State Park.'

The author used these grave sites of unknown Continental soldiers to bring this country's first war to life. These brave men died of disease and exposure in the American camp just before Washington's surprising victory. These twenty-one men didn't live to see America victorious with a future that they helped build by giving their lives to the cause. At this time the Continental Army consisted of soldiers from all the colonies (13) and, after 1776, from all the states. When the war began at the Battles of Lexington and Concord in 1775, the colonial revolutionaries didn't have their own army. The author, writing this story about the fictional young revolutionaries, tells us of the adventures that they might have had. Most of the stories of the war were mostly tales of teens and young adults who strengthened the ranks of the Continental Army and are unknown. Twenty-One Heroes is a young adult historical novel that brings the lives of these unidentified heroes to life and it's very inspiring.

The three young people in the story are Katherine Mayhew, Joshua Spencer and Ezra Wright. Katherine is a girl of the 18th century and a dedicated Patriot, just as obsessive about the revolution as any man. Joshua and Ezra are friends and students at Harvard who are studying issues of politics and the future of the colonies. Katherine's attitude and intelligence motivates the young men on and off the battlefield and the belief in their cause bring the three together as they struggle over the trials of war.

This was a truly interesting story with real people and some not so real but you could identify with them. All Revolutionary War buffs will love this new young adult novel. Most of the narrative takes place in or around 1775 and because the author used real grave sites as his starting point for the story, the tale seemed really and easily came to life.

Quill says: This is definitely a book for all ages, and while there's not a lot about the war itself (I'm sure that most readers have read about the Revolution) this book brings the lives of some of the young patriots to life. Anyone interested in American history will be interested in Mr. Forman's previous books about the 'Birth of our Nation.'