Asleep: The Forgotten Epidemic that Remains One of Medicine’s Greatest Mysteries 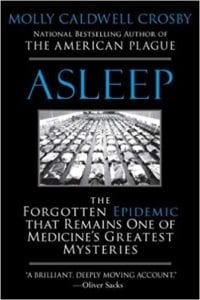 Asleep: The Forgotten Epidemic that Remains One of Medicine's Greatest Mysteries

The year was 1918, and while the world was caught in the midst of a massive war, it was also facing a quiet, but quite deadly strain of influenza that ripped through every country leaving a massive amount of death in its wake. Oddly, in the crux of all the horror and death, another disease surfaced in Europe that proved to be perplexing and completely stumped physicians. The patients suffered from anomalous sleeping symptoms, facial tics and often savage insanity. This strange illness eventually spread around the world, and left a profusion of
permanently debilitated patients in asylums, and caused death in
other patients. Physicians scrambled for answers to this unknown sleeping sickness, which was finally named Encephalitis Lethargica, and by the time they believed they had some answers, although not any concrete enough to consistently assist those suffering from it, Encephalitis Lethargica simply vanished from the world in 1927.

This story is about the few neurologists, primarily in New York, who tirelessly studied this disease's effect. They visited homes and asylums, documented every patient and their unusual and devastating symptoms, spent further hours researching, and finally gave presentations on the disease to educate others. Their hope was to put an end to the ravaging effects of Encephalitis Lethargica before it reared its ugly ahead again.

Molly Crosby truly has a knack for mixing elegant storytelling with researched historical events that entices readers right from the beginning, smoothly and consistently interests readers throughout with biographies of the key players, and well documented case studies, and closes with a personal account that brings the book full circle. Encephalitis Lethargica is a dreadfully serious disease, but is virtually an unknown and mysterious threat that continues to linger, throughout the world. However, thanks to this engrossing book, light is being shed upon the possible potential threat EL could have on people in the present day by exposing the events in detail that led up to the original epidemic.

Readers should not be turned-off by this medical related topic when selecting their possible next read because although it is indeed packed full of research, it reads more like a fascinating medical mystery, rather than a stuffy research paper. Still, the book includes critical documentation that also makes it a crucial read for those in the medical field.

Quill says: This is a well told and quite informative read about a virtually unknown disease, and is highly recommended.