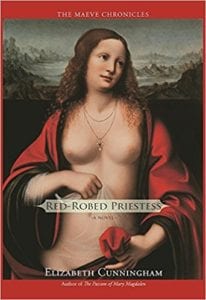 There’s a famous statue of the famous Iceni queen Boadicea (spelled Boudica in the novel) at Westminster Pier in London. This great Celtic queen, who died in 60 or 61 CE, fought nearly all her life against the Roman war machine. Before she died, she was made to watch as her two young daughters were raped by Roman legionaries and then she was flogged. History is awful enough, but when these scenes are rendered in Elizabeth Cunningham’s matchless prose, they will break your heart.

As the fourth novel of the Maeve Chronicles, Red-Robed Priestess brings the great circle of the life of Maeve Rhuad, the Celtic Magdalen, to its conclusion. Although we can read each novel independently, it’s good to read them all and get the story first-hand, from Maeve’s childhood as the daughter of eight Celtic witch mothers on Tir na mBan, the Isle of Women. Though her mothers say her father was a sea-god, she learns when she is sent to druid school on the island of Mona that he was actually a druid. On Mona, the Holy Isle, Maeve meets a young foreign student, Essus. They fall in love. When her druid father makes plans to sacrifice Essus, Maeve comes to his rescue and helps him escape. For her pains, she is tried and sentenced to be sent beyond the ninth wave. Oh, and her father rapes her. Their daughter is sent to be fostered among the Iceni, Maeve survives the sea voyage, and in the next two novels she becomes a slave and then a whore in Rome. Maeve then moves to the Roman colony of Judea, where she is reunited with Essus—Jesus—and, as told in the Bible, she is present at his crucifixion and resurrection, where they experience a transfiguration of their own. Maeve has further adventures with the early Christians and, as Christian legend tells us, lives for awhile with Sarah, her daughter by Jesus, in the south of France.

In Red-Robed Priestess, Maeve is an old woman. Along with Sarah and two of her friends, she rides north across France. She is going home. She is going to meet her elder daughter. And she’s carrying all this emotional baggage.

Gazing out across the English Channel one night, she meets a Roman general. They make love. The Roman general is Gaius Suetonius Paulinus, who is also headed for Pretannia (Britain). This is a finely researched novel, and though Maeve travels back and forth across pre-Roman Britain from Mona to Avalon (present-day Glastonbury) to the Iceni lands north of London, history has to have its way. There are meetings of the combrogos, the druids, the armies, and there is the horrific historical battle in which Boudica is finally defeated. As Maeve’s tale ends, she is standing beside the golden river that divides the worlds of life and death. “Then I see him,” Maeve tells us, “walking through a field, flinging seeds into the sky, letting them fall where they will, among stones and thorns, onto soft earth, into cracks of the sky, the cracks of parched lips. Slowly I get to my feet...He is waiting for me there. His hand is open. The way is open.” (pg. 293). And she steps into the river.

Quill says: This book will own your life while you’re reading it and even after you finish the last page.